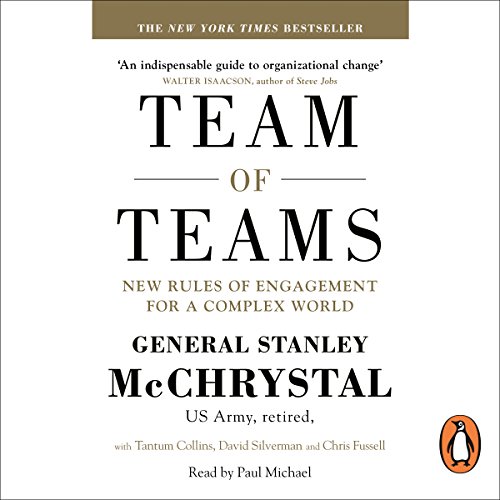 What if you could combine the agility, adaptability, and cohesion of a small team with the power and resources of a giant organisation?

When General Stanley McChrystal took command of the Joint Special Operations Task Force in Iraq in 2003, he quickly realized that conventional military tactics were failing. The allied forces had a huge advantage in numbers, equipment and training - but none of the enemy's speed and flexibility.

McChrystal and his colleagues discarded a century of conventional wisdom to create a 'team of teams' that combined extremely transparent communication with decentralised decision-making authority. Faster, flatter and more flexible, the task force beat back al-Qaeda.

In this powerful audiobook, McChrystal and his colleagues show how the challenges they faced in Iraq can be relevant to any leader. Through compelling examples, the authors demonstrate that the 'team of teams' strategy has worked everywhere from hospital emergency rooms to NASA and has the potential to transform organisations large and small.

"A bold argument that leaders can help teams become greater than the sum of their parts." (Charles Duhigg, author of The Power of Habit)
"An indispensable guide to organisational change." (Walter Isaacson, author of Steve Jobs)

This book is highly polarizing between ethnic groups. .. and the author seems to truly believe that 9.11. happened as it was reported in the media...

I think this book is very detailed, comprehensive and well structured. There is much more to this book than Military thinking. The author gives a wide range of insights of others industries.

This book was relatively long yet worthwhile. If you want to have a glimpse over the horizon regarding teamwork I find this piece here helpful.

Excellent work in my opinion.