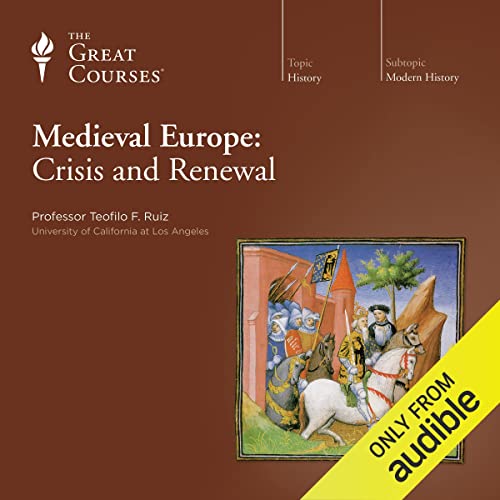 The Middle Ages harshly tested every aspect of human perseverance, imagination, and survival. Living conditions were squalid for almost everyone except the ruling elite, and most of the riches of Western culture were preserved in monasteries and on other continents. And into this setting came widespread famines, prolonged wars, and plagues that marked Europe's late medieval period as one of the most harrowing in recorded history. But Europe was not broken by these crises. Instead, it renewed itself and spawned fundamental artistic, religious, romantic, and political ideas that continue to shape our world to this day. This series of 16 engrossing lectures transports you to 14th-century Europe to experience a hero's tale of cultural trial, suffering, and triumph. It guides you through 200 years of stunning transformations in how people viewed themselves, how they worshiped, and their relationship to land and country, addressing key concepts that include national boundaries, church-state separation, individuality, and sovereignty - all of which find root in the medieval world.

The series is divided into three main sections that provide you a framework for understanding medieval society through detailed descriptions of what life was like for peasants, merchants, and monarchs; show you how this rigid but well-entrenched social structure was shaken to the core by crises like the Hundred Years War and the Black Death, and let you experience the glorious renewal that followed, including the spread of Renaissance ideas and styles; the creation of the modern nation in Castile, France, and England; the "rediscovery" of Plato, and the far-reaching voyages of discovery.