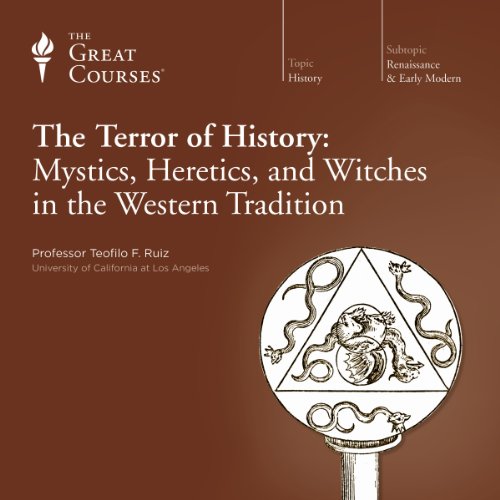 The Terror of History: Mystics, Heretics, and Witches in the Western Tradition

Western civilization is closely associated with reason and science, and with exceptional accomplishments in art, architecture, music, and literature.Yet it has also been characterized by widespread belief in the supernatural and the irrational - with mystics who have visions of the divine and entire movements of people who wait in fervent anticipation of the apocalypse.

Moreover, Western culture has also been the setting for repeated acts of barbaric reaction to those beliefs, including persecutions of certain groups, such as Jews, or of people accused as heretics and witches.

This series of 24 intriguing lectures explores the concept of what has been called the "terror of history," a deeply held ancient belief that human beings live constantly on the edge of doom- a doom against which we must protect ourselves, sometimes by scapegoating an "other" whom we blame for this catastrophic plight.

The lectures explore this belief through a study of mysticism, heresy, apocalyptic movements, and the witch-hunting craze that bloomed in Europe from 1000 to 1700. You'll examine sources you may be unfamiliar with, learn to think in new ways, and gain a fresh perspective on how social, economic, political, and religious climates - especially during times of change and stress - exert tremendous influence on the prevalence of irrational attitudes and persecutions.