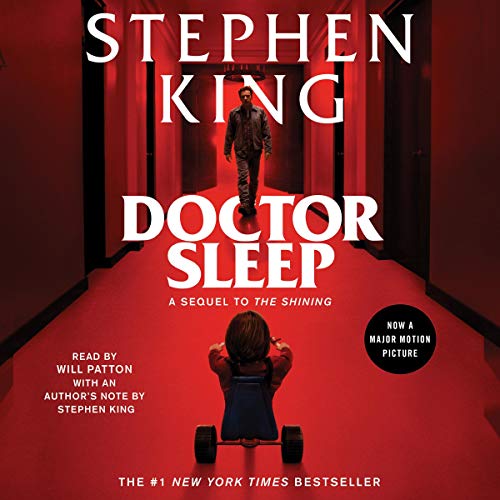 Stephen King returns to the characters and territory of one of his most popular novels ever, The Shining, in this instantly riveting novel about the now middle-aged Dan Torrance (the boy protagonist of The Shining) and the very special 12-year-old girl he must save from a tribe of murderous paranormals.

On highways across America, a tribe of people called The True Knot travel in search of sustenance. They look harmless - mostly old, lots of polyester, and married to their RVs. But as Dan Torrance knows, and spunky 12-year-old Abra Stone learns, The True Knot are quasi-immortal, living off the "steam" that children with the "shining" produce when they are slowly tortured to death.

Haunted by the inhabitants of the Overlook Hotel where he spent one horrific childhood year, Dan has been drifting for decades, desperate to shed his father's legacy of despair, alcoholism, and violence. Finally, he settles in a New Hampshire town, an AA community that sustains him, and a job at a nursing home where his remnant "shining" power provides the crucial final comfort to the dying. Aided by a prescient cat, he becomes "Doctor Sleep."

Then Dan meets the evanescent Abra Stone, and it is her spectacular gift, the brightest shining ever seen, that reignites Dan's own demons and summons him to a battle for Abra's soul and survival. This is an epic war between good and evil, a gory, glorious story that will thrill the millions of hyper-devoted fans of The Shining and wildly satisfy anyone new to the territory of this icon in the King canon.

"Will Patton's delivery enhances King's prose in ways that make King's work so much more enjoyable in audio than just reading it…Patton's narrative voice captures the rhythm of King's words. His character voices, filled with a variety of regional American accents, remain consistent. Most importantly, the sinister aspects that embody characters and moments of this novel are superbly executed and will certainly leave listeners on edge." ( AudioFile)
"King, not one given to sequels, throws fans a big, bloody bone with this long-drooled-for follow-up to The Shining." ( Booklist)
"…a gripping, taut read that provides a satisfying conclusion to Danny Torrance's story." ( Publisher’s Weekly)

I listend to it for the 4th time now and i still find new details. I love it.

Was mochten Sie nicht am Vortrag von Will Patton?