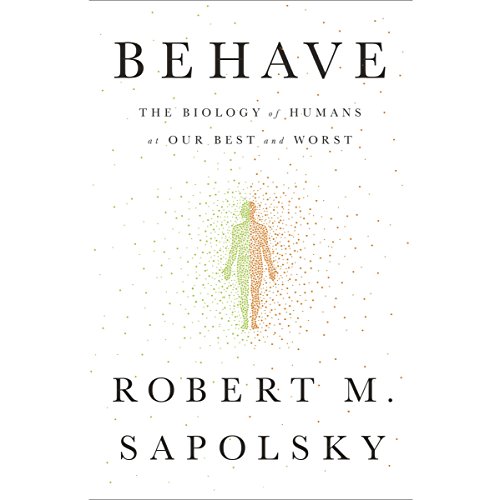 Why do we do the things we do?

More than a decade in the making, this game-changing book is Robert Sapolsky's genre-shattering attempt to answer that question as fully as perhaps only he could, looking at it from every angle. Sapolsky's storytelling concept is delightful, but it also has a powerful intrinsic logic: He starts by looking at the factors that bear on a person's reaction in the precise moment a behavior occurs and then hops back in time from there in stages, ultimately ending up at the deep history of our species and its evolutionary legacy.

And so the first category of explanation is the neurobiological one. A behavior occurs - whether an example of humans at our best, worst, or somewhere in between. What went on in a person's brain a second before the behavior happened? Then Sapolsky pulls out to a slightly larger field of vision, a little earlier in time: What sight, sound, or smell caused the nervous system to produce that behavior? And then, what hormones acted hours to days earlier to change how responsive that individual is to the stimuli that triggered the nervous system? By now he has increased our field of vision so that we are thinking about neurobiology and the sensory world of our environment and endocrinology in trying to explain what happened.

Sapolsky keeps going. How was that behavior influenced by structural changes in the nervous system over the preceding months, by that person's adolescence, childhood, fetal life, and then back to his or her genetic makeup? Finally he expands the view to encompass factors larger than one individual. How did culture shape that individual's group? What ecological factors millennia old formed that culture? And on and on, back to evolutionary factors millions of years old.

The result is one of the most dazzling tours d'horizon of the science of human behavior ever attempted, a majestic synthesis that harvests cutting-edge research across a range of disciplines to provide a subtle and nuanced perspective on why we ultimately do the things we do...for good and for ill. Sapolsky builds on this understanding to wrestle with some of our deepest and thorniest questions relating to tribalism and xenophobia, hierarchy and competition, morality and free will, and war and peace. Wise, humane, often very funny, Behave is a towering achievement, powerfully humanizing, and downright heroic in its own right.

"Sapolsky has created an immensely readable, often hilarious romp through the multiple worlds of psychology, primatology, sociology and neurobiology to explain why we behave the way we do. It is hands-down one of the best books I’ve read in years. I loved it." (Dina Temple-Raston, The Washington Post)

"It’s no exaggeration to say that Behave is one of the best nonfiction books I’ve ever read." (David P. Barash, The Wall Street Journal)

I am only halfway through the book, but I can already tell you, it is amazing, entertaining, insightful and very easy to understand. The author really made an effort to use a lot of examples and metaphers that make the readers understand, even if the reader is not used to scientific books. He also uses comedy and jokes to ease the tension.

The person who voiced the book is also incredible. So the Book itself is great the voice actor is great why did I only give 3 starts overall?

It's because there are 3 important things that I found very annoying about the audiobook.
First: There is no additional PDF with the sketches and pictures that are described in the book - you are hopelessly lost if you are not able to look at them while he is talking about a certain part in the brain.
I personally don't remember where "this" and "that" part of the brain is just because he explained it once. And it certainly doesn't mean I remember where that particular area in the brain is 1 hour later in the book.
That's why I also bought a copy of the book

Second: That is when I noticed that there is a part in the book after chapter one, where the author tells the readers that at the end are additionals chapters to help you understand what he is talking about and where he tells you to look that up before reading further in the book.
I am not at the end of the audiobook so I am not sure if this won't be read to the reader at the end but fact is, that it should have been read by the voice actor at the end of the chapter where the author mentions to look it up.

Third: There are also a lot of amazing footnotes with stories and explanations, which are also not read to the readers in the Audiobook, which is a shame.

I still recommend the audiobook because even though the author explains everything on a level where everyone should be able to understand, it is still a difficult topic so reading along while the audiobook is playing, is helping you taking in the meaning even better.
Also I am not a nativ English speaker and there are a lot of words i have never heard before so it is good to know how to pronounce them AND how to write them so I can look them up.

ALL in all I love this book and I am pretty sure I will read it more than once.

Sapolsky gives a knowing and entertaining overview of the biological foundations of human behavior. He openly acknowledges his atheistic premises.

Steven Pinnker's books: The Blank Slate - the denial of human nature; and The better Angels of our nature are both two tour-de-forces and extremely well-written.
I would recommend anyone having come so far, no one probably has, to read/listen to those books first.

What a great book! Bit hard to follow if you're very tired or not that proficient in English, but still very much worth the concentration! Changed my worldview a bit!

If you survive the complexity and multitude of abbreviations of the first part of the book you will be rewarded with eye-opening revelations as the author arrives at his point in the latter part. Truly amazing!

Tough read but fascinating content delivered in an entertaining way

This is definitely a fascinating read. Very content dense and ambitious in its' scope it is still entertaining - owing to both the author's choice of words and the speaker's deliver.
I specifically liked: the fact that the author seems to be aware of his own biases and points them out.
Avoiding cliches and going into great nuance.
Lots of references to other great books that I've either read with great interest or which ended up on my top-read list.
And finally the structure of the book (going from the occurrence of a behavior backwards through the influences from prior seconds to minutes to days to lifetimes to evolution.

altered profoundly my attitude towards and understanding of humans and life in general . Very well read.