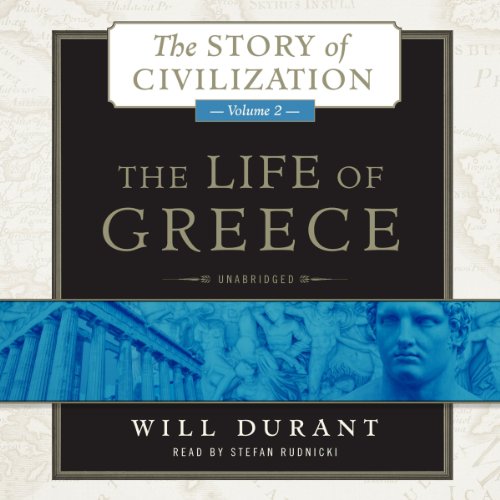 The Life of Greece

The second volume of Will Durant's Pulitzer Prize - winning series The Story of Civilization. Volume 2 chronicles the history of ancient Greek civilization. Here Durant tells the whole story of Greece from the days of Crete's vast Aegean empire to the final extirpation of the last remnants of Greek liberty, crushed under the heel of an implacably forward-marching Rome. The dry minutiae of battles and sieges, of tortuous statecraft of tyrant and king, get minor emphasis in what is preeminently a vivid recreation of Greek culture, brought to the listener through the medium of supple, vigorous prose.

In this masterful work, listeners will learn about:

Nourishment for the mind

If you love history there is nothing that compares to this comprehensive book. It is food for the mind and will enlighten you upon the history of Greece which will help you make connections to other parts of history and connect the dots of western thought and enlightenment.