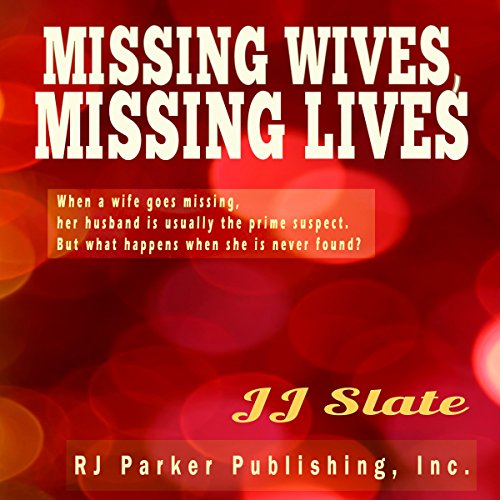 When a wife goes missing, her husband is often the prime suspect in her disappearance. But what happens when she is never found? These are the stories of 30 missing women.

Fascinated by missing persons reports and cold cases for as long as she can remember, JJ Slate's debut true crime audiobook highlights 30 shocking true stories of wives that have mysteriously vanished, presumably at the hands of her husband.

Countless cases like these have played out under the public spotlight, and many of them have been solved after the wife's remains have eventually been found. But some of these women remain missing years later, denying the families their right to bury their loved ones. Many of these families continue the gruesome search for the remains of their daughter, granddaughter, sister, aunt, or mother years, even decades, later.

Missing Wives, Missing Lives focuses on 30 unique cases in which the wife has never been found and the undying efforts of her family as they continue the painful search to bring her home. The audiobook covers decades older cases, such as Jeanette Zapata, who has been missing since 1976, to more recent and widely known cases, such as Stacy Peterson, who has been missing since 2007.

Keeping these women's stories alive may be the key to solving the mystery and bringing them home to their families. Someone out there knows something.