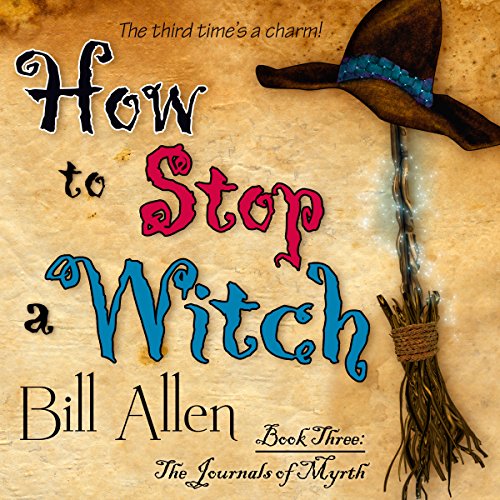 How to Stop a Witch

Let me to be the first to offer my condolences on your unfortunate demise.

Once again the kingdom of Myrth is in danger, and once again a prophecy claims Greg will save the day. Only this time, the prophecy also predicts Greg's death. So when he receives a letter telling him not to go to Myrth, he is all too happy to stay home. But Greg knows prophecies cannot be denied. If it has been foretold that he will lose his life, then he will surely do so, and each minute he delays may cost the life of one of his friends.

This time it is Witch Hazel Greg must face, and she holds the Amulet of Tehrer, an artifact of unimaginable power that lets her bend the will of dragons. Greg's only hope of defeating her is to elicit help from a man from the strange land of Myrth and then travel to the Netherworld - not the safest place for him to visit, since there, children's body parts draw a high price for use in spells of Dark Magic.

Greg has already survived two trips to Myrth, but how can he be expected to survive a third? According to the prophecy, he can't.

Bill Allen may be described as an unusual man who has accomplished an unusual many deeds. In fact, it has been said that if you total up all the things he claims to have done, he cannot possibly be less than 700-years-old.

No one knows if this is true. All that is certain is that for much of that time, he's been living in Melbourne, Florida with his wife, Nancy, writing software by day and, well, mostly sleeping by night. Every now and again he writes stories, too. But then I guess you already knew that. Find out more about all of Bill Allen's books at billallenbooks.com.

Das sagen andere Hörer zu How to Stop a Witch