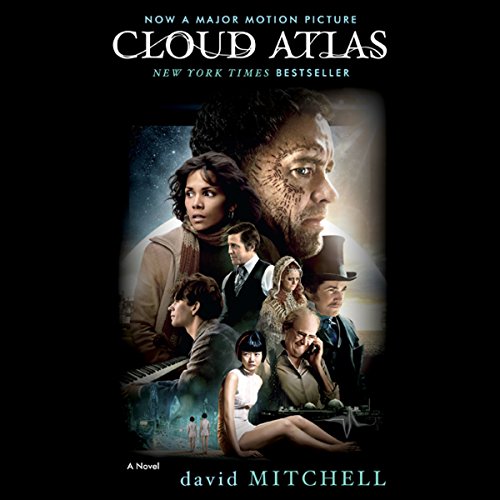 From David Mitchell, the Booker Prize nominee, award-winning writer, and one of the featured authors in Granta's Best of Young British Novelists 2003 issue, comes his highly anticipated third novel, a work of mind-bending imagination and scope.

A reluctant voyager crossing the Pacific in 1850; a disinherited composer blagging a precarious livelihood in between-the-wars Belgium; a high-minded journalist in Governor Reagan's California; a vanity publisher fleeing his gangland creditors; a genetically modified "dinery server" on death-row; and Zachry, a young Pacific Islander witnessing the nightfall of science and civilization: the narrators of Cloud Atlas hear each other's echoes down the corridor of history, and their destinies are changed in ways great and small.

In his captivating third novel, shortlisted for the Booker Prize, David Mitchell erases the boundaries of language, genre, and time to offer a meditation on humanity's dangerous will to power, and where it may lead us.

"[Mitchell's] exuberant, Nabokovian delight in word play; his provocative grapplings with the great unknowables; and most of all his masterful storytelling: all coalesce to make Cloud Atlas an exciting, almost overwhelming masterpiece." ( Washington Times)
"A remarkable book....It knits together science fiction, political thriller, and historical pastiche with musical virtuosity and linguistic exuberance: there won't be a bigger, bolder novel next year." ( The Guardian)
"[ Cloud Atlas] glows with a fizzy, dizzy energy, pregnant with possibility and whispering in your ear: listen closely to a story, any story, and you'll hear another story inside it, eager to meet the world." ( The Village Voice)

This is a very cleverly written piece and although I still don't understand the "Cloud Atlas" Title, recommended.The Readers are all very good, only the Somni Reader is at first a little annoying with a slight speech defect but one gets used to it and it then fits the part.

difficult to understand; would have been much better with a british speeker; and in sufficient sound quality...