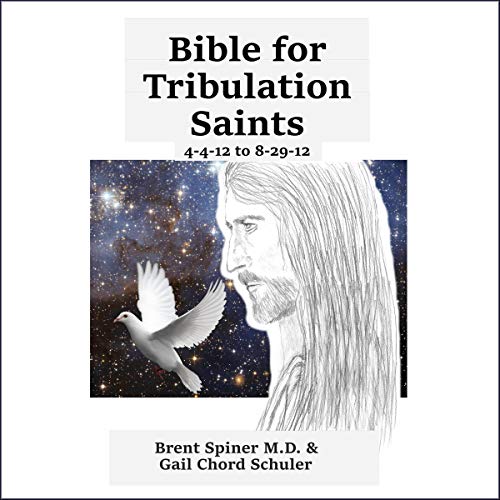 This book covers my jealous sister, who betrayed me and my men, even after my men made a personal appearance to her in May 2012. The real Jim Carrey's death in late spring 2012 after an epic space battle is recorded in this audiobook. Jesuits murdered the real Barack Obama (end of March 2012) with Vladimir Putin involved after Vladimir and Hugh Jackman tried to rescue some "defector" Jesuits. I lost my job in June 2012 and Jesus counseled me, but I have a hard time at first with some of Jesus' advice. Keanu Reeves has a prolonged conversation with me on Skype in August 2012. Brent Spiner opened up about the horror of his "relationship" with Loree McBride to help me make my movie Brent Spiner's Rape. Jesus advised me and my men through all of this, with all the conversations recorded intact and verbatim, while Jesus made frequent appearances with us to help me and my men stay on our path.

I noticed as I read Bible for Tribulation Saints is that I kept wishing this was an audio book, so I could listen to it throughout the day to help keep me on track. I also kept wishing the chapters were shorter, so I'd have a nice stopping place, without getting lost. We need to know what Jesus said. His words are so important. I've noticed Satan tries to get me to forget what Jesus has told us.

I actually think Jesus wrote the book and just used me as His instrument! My main role was transcriber. Brent Spiner wrote me lots of letters and he's such a good writer, I could just publish what he wrote verbatim; that's why I've given him co-author credit. Though, of course, I'm the only narrator for the audio book unless Brent has a secret project to do over the audiobook and replaces my voice with his for my readings of himself.