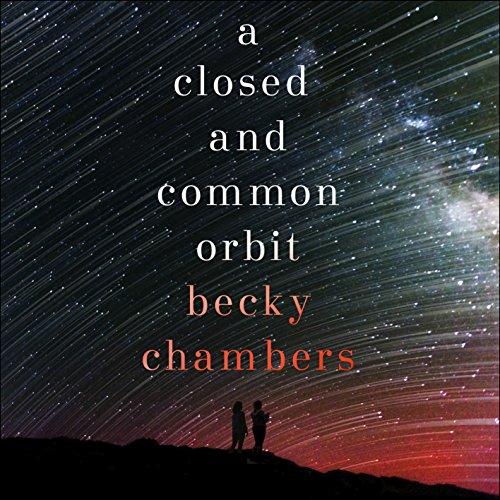 A Closed and Common Orbit

Lovelace was once merely a ship's artificial intelligence. When she wakes up in a new body following a total system shutdown and reboot, she has to start over in a synthetic body, in a world where her kind are illegal. She's never felt so alone. But she's not alone, not really.

Pepper, one of the engineers who risked life and limb to reinstall Lovelace, is determined to help her adjust to her new world. Because Pepper knows a thing or two about starting over.

Together Pepper and Lovey will discover that, huge as the galaxy may be, it's anything but empty. The Long Way to a Small, Angry Planet introduced listeners to the incredible imagination of Becky Chambers and has been nominated for any number of awards and accolades, including the Baileys Prize for Women's Fiction, the Tiptree Award, the Kitschies Golden Tentacle and the Arthur C. Clarke Award.

A Closed and Common Orbit is the stand-alone sequel to The Long Way to a Small, Angry Planet and is perfect for fans of Firefly, Joss Whedon, Mass Effect and Star Wars.

SF World-Building with Purpose and Heart

This second entry into Chambers's "Wayfarer" series picks up where part one left off. Cleverly, it uses two minor character from that first book and takes them away from the 'Wayfarer.'

In essence, this is a double coming of age story in two timelines that eventually lead to a shared place—home. It is "slow" in that it takes its time to establish its worlds and its characters, but you want to be along for the ride every minute. In that way, it is expertly paced.

This is a book that tackles big questions in small ways, and it's a winning combination. I did not expect to like this as much as "The Long Way to a Small Angry Planet" at first, but ended up liking it even more.

Chambers's universe echoes Le Guin without ever being merely epigonal or derivative. It's a worthwhile addition to the collection of sci fi worlds that have become so numerous, and there are many stories still to be told in that world.

Rodriguez's narration isn't flashy and it suits the material well. All in all, a definite recommendation if you want your SF to tell stories about people and what it means to be alive.

For some people maybe to little action/ progress but i think its exactly in the right tempo. Definitely a good second saga. I don't mind that's about pepper and lovely 2.0

An underwhelming story with good characters.

Unfortunately, as a fan of the first book, I was massively disappointed when I realized this book is about completely different people without the adventures of the wayfarer.

The story is well told, but ultimately very slow and at least to me not gripping.

The voice actress again garners my deepest respect for her performance.

I will give the next book a chance anyway.

The best speaker performance i heard so far.

The best speaker performance i heard so far. Wonderfull and consistent storry. No miraculous time-jumps like the ones in book 1.
Summed up: its the story of Pepper