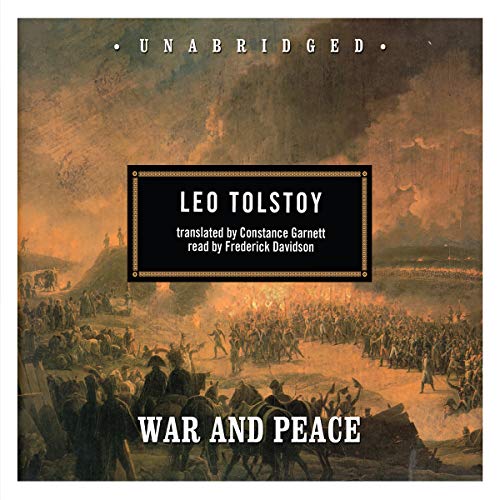 Often called the greatest novel ever written, War and Peace is at once an epic of the Napoleonic wars, a philosophical study, and a celebration of the Russian spirit. Tolstoy's genius is clearly seen in the multitude of characters in this massive chronicle, all of them fully realized and equally memorable. Out of this complex narrative emerges a profound examination of the individual's place in the historical process, one that makes it clear why Thomas Mann praised Tolstoy for his Homeric powers and placed War and Peace in the same category as The Iliad.

War and Peace was translated by Constance Garnett.

First I was bored then suddenly I loved it

A curious book. First I was really bored, couldn't tell the characters apart and thought this story could have been told in 10min.Then after half the book (40h!) I suddenly loved it. It doesn't really tell a story but instead paints a picture of a specific time, Russia and even humanity in general. Most of the characters do idiotic things, which first annoyed me, but is probably what makes them feel real. It's quite amazing when you get into it. I listened to the first half again after finishing, being better able to follow it and enjoying it. I'm already thinking about reading our listening to the whole thing again and would recommend it to anyone willing to put in the time.

It was very difficult to get into the story. Practically the first half was slow and I was struggling to get into it. I gave up a few times and then decided to go back to it. I'm so glad I persevered. Now I want to find the movie and watch many documentaries about Napoleon's campaign in Russia. Highly recommended if you are patient and perseverant.