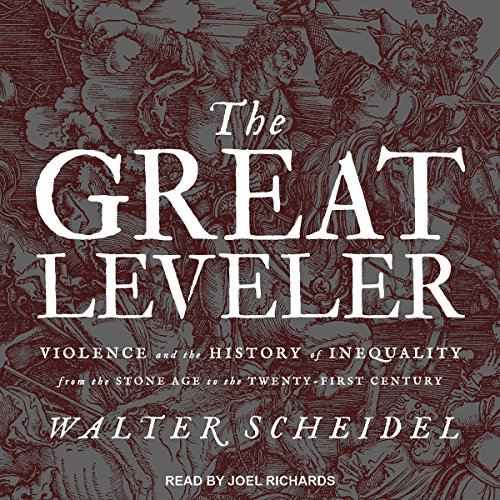 Are mass violence and catastrophes the only forces that can seriously decrease economic inequality? To judge by thousands of years of history, the answer is yes. Tracing the global history of inequality from the Stone Age to today, Walter Scheidel shows that inequality never dies peacefully. Inequality declines when carnage and disaster strike and increases when peace and stability return. The Great Leveler is the first book to chart the crucial role of violent shocks in reducing inequality over the full sweep of human history around the world.

Ever since humans began to farm, herd livestock, and pass on their assets to future generations, economic inequality has been a defining feature of civilization. Over thousands of years, only violent events have significantly lessened inequality. The "Four Horsemen" of leveling - mass-mobilization warfare, transformative revolutions, state collapse, and catastrophic plagues - have repeatedly destroyed the fortunes of the rich.

Scheidel identifies and examines these processes, from the crises of the earliest civilizations to the cataclysmic world wars and communist revolutions of the 20th century. Today, the violence that reduced inequality in the past seems to have diminished, and that is a good thing. But it casts serious doubt on the prospects for a more equal future.

Too academic for an audio book

In my opinion this book is way too academic in its language for an audio book. It throws around loads of numbers, making it impossible to stay concentrated. In the end however all the numbers are just different calculations of one measure: how many percent of rich people own how many percent of total wealth etc. I bought this book as I saw it on the Financial Times book list, but as it is not really popular science I would only suggest it to people who have a really profound interest in the topic.