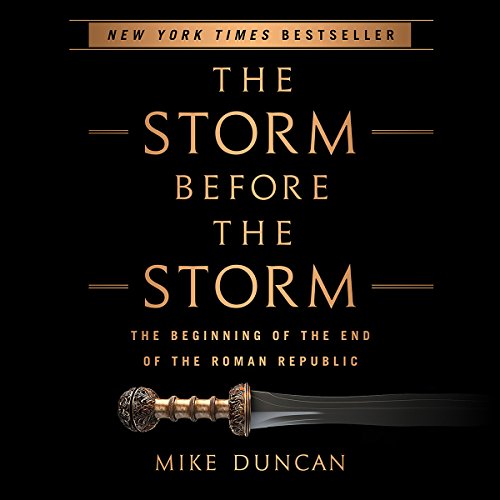 The Storm Before the Storm

The creator of the massively popular, award-winning podcast series The History of Rome brings to life the story of the tumultuous years that set the stage for the fall of the Roman Republic.

The Roman Republic was one of the most remarkable achievements in the history of civilization. After its founding in 509 BCE, the Romans refused to allow a single leader to seize control of the state and grab absolute power. The Roman commitment to cooperative government and peaceful transfers of power was unmatched in the history of the ancient world.

But by the year 133 BCE, the republican system was unable to cope with the vast empire Rome now ruled. Almost as soon as they had conquered the Mediterranean, Rome became engulfed in violent political conflicts and civil wars that would destroy the Republic less than a century later.

Chronicling the years 133-80 BCE, The Storm Before the Storm is a rollicking deep dive into the bloody battles, political machinations, and human drama that defined a dangerous new political environment - a stark warning for modern listeners about what happens to a civilization driven by increasing economic inequality, political polarization, and ruthless ambition.

Das sagen andere Hörer zu The Storm Before the Storm

Concise review of the republic before its transition into the empire

If you love your Roman history this audiobook is hard to ignore. It’s fun and entertaining and I just wish it kept on going.

Excellent brush up on history

Duncan has found an excellent mixture of prose and tempo to keep this engaging and not lose one in a multitude of names, dates, and actions. There are also very good summaries along the way. His slightly slurred and fast-paced US English takes time to get used to, but it is what it is.

On the whole this is an important, but not well-covered (at list in pop lit) piece of Roman history.