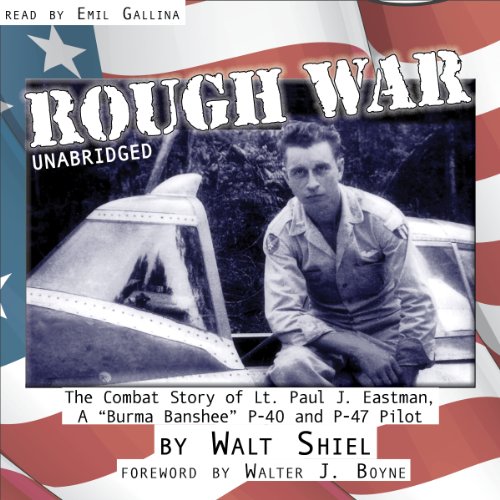 Paul Eastman, a small-town Wisconsin boy turned P-40 fighter pilot, lands in the jungles of Assam and Burma in 1943. Lt. Eastman's compelling story, gleaned from his diary and letters home and illustrated with his personal photos, provides unique insights into the realities of combat life and death, punctuated by love and concern for the wife he left behind. Author Walt Shiel skillfully interleaves an informative history of the broader war into Eastman's personal accounts.

Eastman evolves from an innocent abroad to a fatalistic combat veteran - through missions that careen from mundane to adrenalin-fueled in a single heartbeat and through the humor, revelry, camaraderie, fatigue, and death that surround daily life. And through the "soul-numbing terror" of being shot down behind enemy lines. Like warriors before and after him, Eastman's war does not end after his 20 months of combat. After a decade of struggling to adapt, he finally takes his own life in a poignant episode that could be lifted from today's headlines.

Listen to Eastman's story, then give thanks to the veterans, past and present, who fight and die to preserve our freedoms.