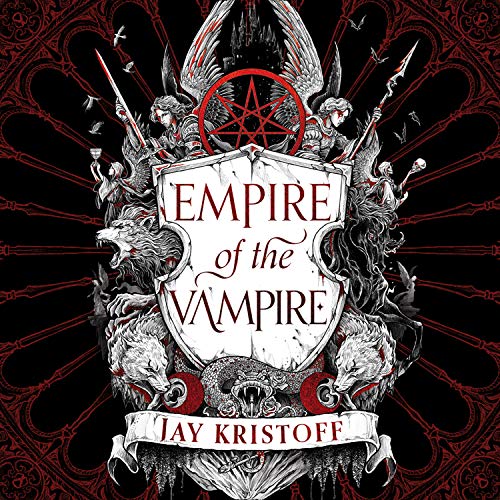 Empire of the Vampire

From the Sunday Times best-selling and award-winning author of the Nevernight Chronicle comes this masterful new series.

It has been 27 long years since the last sunrise.

For nearly three decades, vampires have waged war against humanity, building their eternal empire even as they tear down our own. Now, only a few tiny sparks of light endure in a sea of darkness.

Gabriel de León, half man, half monster and last remaining silversaint - a sworn brother of the holy Silver Order dedicated to defending the realm from the creatures of the night - is all that stands between the world and its end.

Now imprisoned by the very monsters he vowed to destroy, the last silversaint is forced to tell his story. A story of legendary battles and forbidden love, of faith lost and friendships won, of the Wars of the Blood and the Forever King and the quest for humanity’s last remaining hope:

"With a delicate balance of the ancient and the magical, this tense and brutal tale is unflinching, thrilling and satisfying." (Publishers Weekly)

"A gothic bloodbath that will leave any reader breathless. The story is a vast apocalyptic canvass, reminiscent of Justin Cronin’s The Passage or even Stephen King’s The Stand, yet Kristoff’s work stands on its own ruthless merit as the opening gambit of a richer tale yet to unfold. I can’t wait to return again to this rich, lush, and bloody world. Until then, read this book now!" (James Rollins, number one New York Times author of The Last Odyssey and The Starless Crown)

A behemoth of a legends start

Fisrt of all: Damian Lynch has done an outstanding job on this one! It was an absolute treat to listen to this audiobook and he has an absolutely amazing voice which he uses in such an fitting way for each character!
To the story itself:
Mister Kristoff has outdone himself!
The story intrigues you from the beginning. And as longer you hear the tale of the bastard of an protagonist and his journey through his youth full of foolish hope and his broken adult self you are enthralled. This book leaves you hanging on your seat and I can't wait for the next one to drop. As Gabe himself would say: Fuck.my.face! This one is going to be talked about in years too come!

I adore the speaker. He did an excellent job.
The story itself is bloody, full of gore and foul language. And it is brilliant. I like the world Building and the Narration Style. If you don’t mind swear words and a little blood it’s the perfect book for you.