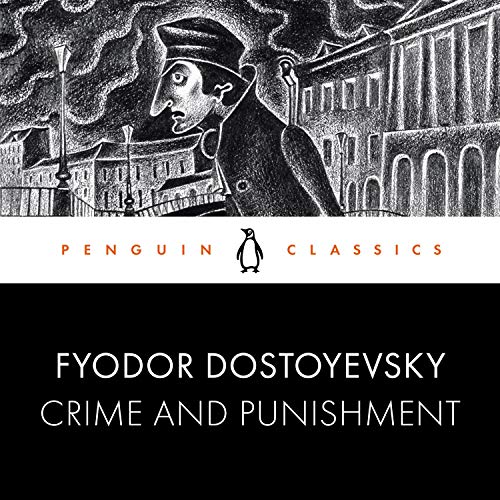 This Penguin Classic is performed by Don Warrington, known for his roles in Death in Paradise and The Five as well as his multiple Shakespearean performances. This definitive recording includes an introduction by Oliver Ready.

This acclaimed new translation of Dostoyevsky's 'psychological record of a crime' gives his dark masterpiece of murder and pursuit a renewed vitality, expressing its jagged, staccato urgency and fevered atmosphere as never before. Raskolnikov, a destitute and desperate former student, wanders alone through the slums of St. Petersburg, deliriously imagining himself above society's laws. But when he commits a random murder, only suffering ensues. Embarking on a dangerous game of cat and mouse with a suspicious police investigator, Raskolnikov finds the noose of his own guilt tightening around his neck. Only Sonya, a downtrodden prostitute, can offer the chance of redemption.

Fyodor Dostoevsky (1821-1881) was born in Moscow and made his name in 1846 with the novella Poor Folk. He spent several years in prison in Siberia as a result of his political activities, an experience which formed the basis of The House of the Dead. In later life, he fell in love with a much younger woman and developed a ruinous passion for roulette. His subsequent great novels include Notes from Underground, Crime and Punishment, The Idiot, Demons and The Brothers Karamazov.

Oliver Ready is Research Fellow in Russian Society and Culture at St Antony's College, Oxford. He is general editor of the anthology, The Ties of Blood: Russian Literature from the 21st Century (2008) and Consultant Editor for Russia, Central and Eastern Europe at the Times Literary Supplement.

"A truly great translation.... This English version really is better." (A. N. Wilson, The Spectator)