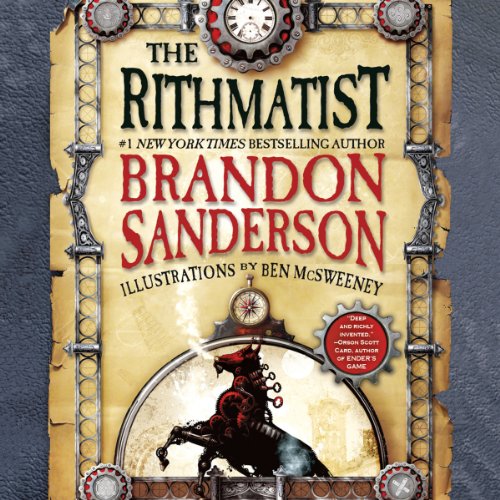 More than anything, Joel wants to be a Rithmatist. Chosen by the Master in a mysterious inception ceremony, Rithmatists have the power to infuse life into two-dimensional figures known as Chalklings. Rithmatists are humanity’s only defense against the Wild Chalklings - merciless creatures that leave mangled corpses in their wake. Having nearly overrun the territory of Nebrask, the Wild Chalklings now threaten all of the American Isles.

As the son of a lowly chalkmaker at Armedius Academy, Joel can only watch as Rithmatist students study the magical art that he would do anything to practice. Then students start disappearing - kidnapped from their rooms at night, leaving trails of blood. Assigned to help the professor who is investigating the crimes, Joel and his friend Melody find themselves on the trail of an unexpected discovery - one that will change Rithmatics - and their world - forever.

Best-selling author Brandon Sanderson brings his unique brand of epic storytelling to the teen audience with an engrossing tale of danger and suspense - the first of a series. With his trademark skills in world-building, Sanderson has created a magic system that is so inventive and detailed that listeners who appreciate games of strategy and tactics just may want to bring Rithmatics to life in our world.

Great story with a nice concept

I enjoy Brandon Sandersons works, this one was faster paced than most but still in a nicely constructed fantasy world. Without spoiling the greatest thing of the book is difficult to mention, but I really enjoyed the development of the main character.

Despite the 5 star review I have to say I disliked the ending. It bordered on implausible and suggested a book series that does not exist.

Gripping towards the end.

Mr. Sanderson over did it with the worldbuilding, just a tad. the world ist beautiful, that's not it, as well as expertly crafted and unique, but sometimes I wished there was more story going on. as of this date, the way of kings is still vastly superior, but the rithmathist is a book even young adults who can't get enough Sanderson can enjoy.