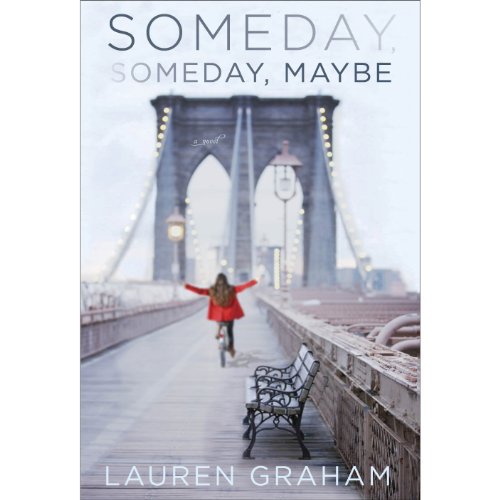 From Lauren Graham, the beloved star of Gilmore Girls and Parenthood, comes a witty, charming, and hilariously relatable debut novel about a struggling young actress trying to get ahead - and keep it together - in New York City.

It’s January 1995, and Franny Banks has just six months left of the three-year deadline she set for herself when she came to New York, dreaming of Broadway and doing "important" work. But all she has to show for her efforts so far is a part in an ad for ugly Christmas sweaters, and a gig waiting tables at a comedy club. Her roommates - her best friend, Jane; and Dan, an aspiring sci-fi writer - are supportive, yet Franny knows a two-person fan club doesn’t exactly count as success. Everyone tells her she needs a backup plan, and though she can almost picture moving back home and settling down with her perfectly nice ex-boyfriend, she’s not ready to give up on her goal of having a career like her idols, Diane Keaton and Meryl Streep. Not just yet.

But while she dreams of filling their shoes, in the meantime, she’d happily settle for a speaking part in almost anything - and finding a hair product combination that works.

Everything is riding on the upcoming showcase for her acting class, where she’ll finally have a chance to perform for people who could actually hire her. And she can’t let herself be distracted by James Franklin, a notorious flirt and the most successful actor in her class, even though he’s suddenly started paying attention. Meanwhile, her bank account is rapidly dwindling, her father wants her to come home, and her agent doesn’t return her calls. But for some reason, she keeps believing that she just might get what she came for.

Someday, Someday, Maybe is a story about hopes and dreams, being young in a city, and wanting something deeply, madly, desperately. It’s about finding love, finding yourself, and perhaps most difficult of all in New York City, finding an acting job.

This sweet, semi-autobiographical book is read by Lauren Graham herself, which makes it even more fun. I quickly got invested in the characters and thoroughly enjoyed the book

I really liked this book! Actually maybe even loved it. I wish she would write more novels. I like that the focus is not all on the romance and that the mistakes she makes are so relatable. After this I’d probably read anything Lauren writes.

Great fun, very good narration by the author herself. Very good story and loads of opportunities to laugh out load.

Really loved this book. Lauren is so fun to listen to! Light, cheary and funny! You really feel with Franny the main character of the book and as my best friend is an actress too I could really relate to the story. definitely recommend this book :)

every young actress should read this. In Fact every young Artist or bold dreamer can relate to this . Let yourself be comforted and advised by this smart and sensible woman!