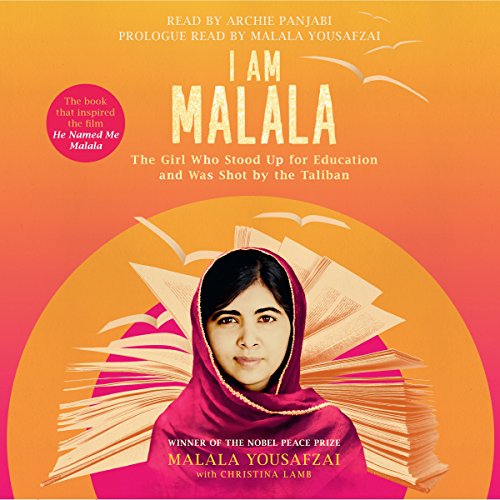 In 2009 Malala Yousafzai began writing a blog on BBC Urdu about life in the Swat Valley as the Taliban gained control, at times banning girls from attending school. When her identity was discovered, Malala began to appear in both Pakistani and international media, advocating the freedom to pursue education for all.

In October 2012, gunmen boarded Malala's school bus and shot her in the face, a bullet passing through her head and into her shoulder. Remarkably, Malala survived the shooting. At a very young age, Malala Yousafzai has become a worldwide symbol of courage and hope. Her shooting has sparked a wave of solidarity across Pakistan, not to mention globally, for the right to education, freedom from terror and female emancipation.

I Am Malala, the memoir of Malala Yousafzai, will shed insight into the lives of those children who cannot attend school, will tell the inspiring story of a schoolgirl faced the Taliban with courage and bravery. Read by Archie Panjabi, with a prologue read by Malala Yousafzai.

"Narrator Archie Panjabi is an excellent choice to deliver this memoir of the Pakistani girl who stood up to the Taliban. Her voice is youthful, lilting, and buoyant, invoking the key qualities of the now well-known young woman who, at the age of 15, was shot three times in the face by the Taliban because she actively advocated education for girls. Panjabi narrates with vigor; rapid sentences and warm tones evoke Malala's persona. The listener has the feeling of being told this story by Malala herself rather than by an actor, which is the best type of audiobook. Those who want to hear more about Afghanistan, Pakistan's Swat Valley, or the family behind this courageous young person will not be disappointed." ( AudioFile)

Great audiobook about an extremely special girl. Loved the reading. The book is an authentic account of her life, a bit of a diary-style. There'ss not much art in it, but it's well-written and easy to listen to,Never boring or long.