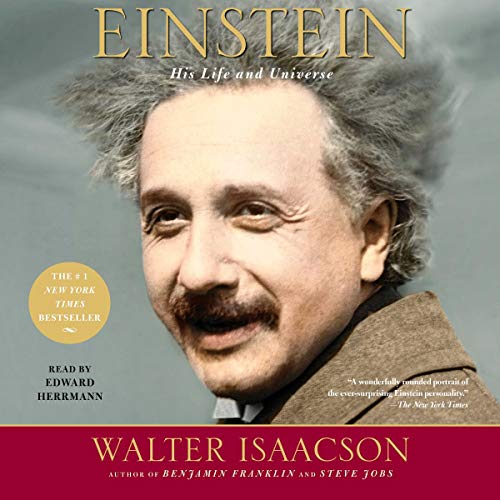 Why we think it's Essential: Isaacson is the modern master of the biography, so it was only natural that he turn his pen to Einstein. And more than any biography of the past, Isaacson's account unravels the life behind the brain and provides a full picture of the man who embodied the scientific spirit of the 20th century. Edward Herrmann is stirring and moves effortlessly from humorous anecdotes to scientific theories. — Chris Doheny

Winner of the 2008 Audie Award for Biography/Memoir

How did Einstein's mind work? What made him a genius? Isaacson's biography shows how his scientific imagination sprang from the rebellious nature of his personality. His fascinating story is a testament to the connection between creativity and freedom.

Based on the newly released personal letters of Albert Einstein, Walter Isaacson explores how an imaginative, impertinent patent clerk, a struggling father in a difficult marriage who couldn't get a teaching job or a doctorate, became the mind reader of the creator of the cosmos, the locksmith of the mysteries of the atom and the universe. His success came from questioning conventional wisdom and marveling at mysteries that struck others as mundane. This led him to embrace a morality and politics based on respect for free minds, free spirits, and free individuals.

These traits are just as vital for this new century of globalization, in which our success will depend on our creativity, as they were for the beginning of the last century, when Einstein helped usher in the modern age.

"[A] lucid account." ( Publishers Weekly)
"Isaacson has admirably succeeded in weaving together the complex threads of Einstein's personal and scientific life to paint a superb portrait." (Arthur I. Miller, author of Einstein, Picasso)
"Isaacson has written a crisp, engaging, and refreshing biography, one that beautifully masters the historical literature and offers many new insights into Einstein's work and life." (Diana Kormos Buchwald, General Editor of the Collected Papers of Albert Einstein)

Interesting, a bit long though but worth the time.

At some points i got annoyed with how frequently the author mentioned Einsteins name in each sentence. It felt like a drag hearing at the end of a sentence and at the beginning of the next the name mentioned. All in all i enjoy it though, listing in moderation like an hour or two it was splendid.

what a marvellous human being

for sure it is a long listen. But it is also about one of our most important human beings ever to live on this planet. do it :)

What an amazing story!

The reader's performance is very good as usual. I've learned a lot from this book about Einstein's life, his work and his way of thinking. I recommend this book to everyone.

Great story about it probably one of the greatest scientists of our Generation. this was a truly wonderful story.