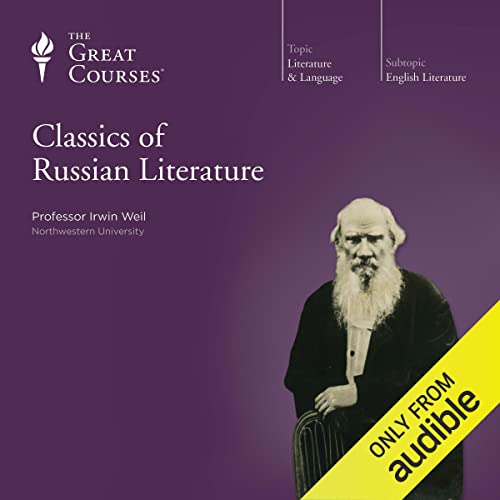 Russian literature famously probes the depths of the human soul, and in this series of 36 insightful lectures prepared by a frequently honored teacher legendary among educators in both the United States and Russia - you probe just as deeply into the extraordinary legacy that is Russian Literature itself.

In all, you plunge into more than 40 works by a dozen writers, from Aleksandr Pushkin in the 19th century to Aleksandr Solzhenitsyn in the 20th century. You also investigate the origin of Russian literature itself, which traces its lineage back to powerful epic poetry and beautiful renderings of the Bible into Slavic during the Middle Ages.

All of these works are treated in translation, but Professor Weil does something very unusual in the literature-in-translation arena. For almost every passage that he quotes in English, he reads an extract in the original Russian, with a fluent accent and an actor's sense of drama.

A very good way to learn about Russian Literature

This is a very nice course. It gives a great introduction into classic Russian literature. In the course, many important works of literature are summarized and the Professor gives not only the English translation but also the Russian original to provide an insight into the rhythm and melody of Russian poetry. This is enjoyable and the enthusiasm of the Professor is very authentic. Sometimes I find the language a bit repetitive, but this also gives it the feel of a real lecture where the professor just talks to his students. I would have liked to learn more about the more contemporary literary scene in Russia but I suppose a course called "classics" cannot be expected to provide an insight into recent developments.