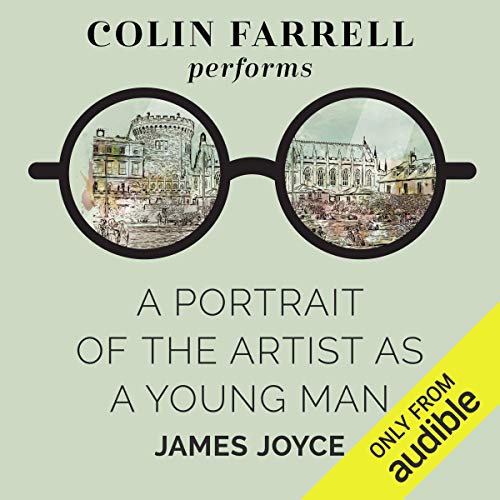 A Portrait of the Artist as a Young Man

A Portrait of the Artist as a Young Man

Golden Globe winning actor and Dublin native Colin Farrell revisits his home country with a moving, authentic performance of one of Irish icon James Joyce’s masterworks, A Portrait of the Artist as a Young Man.

The quintessential coming-of-age story follows Stephen Dedalus as he matures in an era marked by budding Irish nationalism and intensely conservative Catholicism. From infancy to adulthood, Stephen struggles to find his place, flitting between periods of guilt-ridden fanatical religious obsession and hedonistic exploration. But even as he is pulled in every direction by family, flesh, faith, and nation, Stephen longs for something seemingly forbidden–the life of an artist.

Joyce’s first work to experiment with stream of consciousness style—a technique that he and his contemporaries developed—A Portrait of the Artist as a Young Man evokes both the pains and complexities of growing up and the furious optimism that accompanies youth. Pulling from events from his own past, Joyce weaves a semi-autobiographical recount of life in nineteenth century Ireland, crafting a narrative that is at once tender and sharply satirical. When combined with Farrell’s gentle brogue, Joyce’s tale soars, as much a portrait of the artist as it is a portrait of Ireland itself.

"Colin Farrell's narration of this classic certainly does not disappoint. James Joyce's prose often seems like it was written to be narrated because of its natural musicality and cadence.... Farrell's emphatic, lilting voice follows Stephen's mind into the nooks and crannies of consciousness. His vocal characterizations are distinct and effective, especially his loud, bold portrayal of Simon Dedalus, Stephen's father, a striking contrast to the sensitive, soft-spoken son. Yet Farrell captures the many facets of Stephen's thoughts and emotions, which run the gamut from boldness to meekness. Farrell's ability to handle such a variety of emotions in creating Stephen's voice makes this relatively short audiobook a success." (AudioFile Magazine)

It is James Joyce's inherent talent as an Irishman to be able to narrate the captivating story of a young Irishman, who struggles with a rural catholic upbringing and education as he goes off to the city to study philosphy and literature, as if it was a bedtime story. Colin Farrell manages to capture the Irishness and lightness of the storytelling most beautifully and contributes to an overall brilliant listening experience.

This book is a definitive Must Listen for all Joyce fans and newbies in Irish literature.

Although I've selected high quality in my app's audio settings, the compression was just too bad.