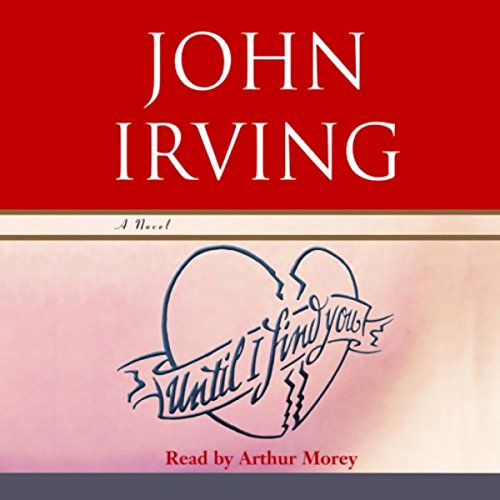 Until I Find You

Until I Find You is the story of the actor Jack Burns, his life, loves, celebrity, and astonishing search for the truth about his parents.

When he is four years old, Jack travels with his mother Alice, a tattoo artist, to several North Sea ports in search of his father, William Burns. From Copenhagen to Amsterdam, William, a brilliant church organist and profligate womanizer, is always a step ahead, has always just departed in a wave of scandal, with a new tattoo somewhere on his body from a local master or "scratcher".

A melancholy tale of deception, Until I Find You is also a swaggering comic novel, a giant tapestry of life's hopes. It is a masterpiece to compare with John Irving's great novels, and restates the author's claim to be considered the most glorious, comic, moving novelist at work today.

“As ever, Irving is at his best with the family relationships he creates. They are simultaneously touching and infuriating. It is with these relationships that Irving firmly grasps universal truths and puts a chokehold on his readers…. Irving’s descriptions are distressing to read, but they force the reader to relate to the characters in a way they would not in most works of fiction.” ( Calgary Herald)
“ Until I Find You . . . cuts closer to the bone than any of [Irving’s] previous works.” ( Ottawa Citizen)
“Bittersweet . . . moving.” ( People)

Das sagen andere Hörer zu Until I Find You

A Quest for Love and a Lot of Sex and Tattoos

John Irving is always good for a surprise and this novel is no exception. He takes us on a seemingly endless odyssey, where we wade through a quagmire of sexual obsession, child abuse, prostitution and other facettes of the darker side of human society, but also gather a lot of insight into the colorful world of tattoo addicts.

Arthur Morey is the perfect voice to tell this story and he manages to guide us through the neverending saga in an entertaining way.

In the story we accompany the young Jack Burns, who travels with his mother Alice, a very skilled tattoo artist, all over Europe to find his father William. William is an extremely talented organist, who left Alice after a short romance, before Jack was borne. The journey is eventful, but without success. Alice returns with Jack to Canada, where he grows up to become a wrestler and successful and famous actor. At a very early stage Jack becomes obsessed with sex, but he seems to be unable to build lasting relationships. To our amazement, he never tries to make love to Emma, the only girl, he is really devoted to and really loves.
So far Jack never saw his father, but all his live, he is thinking about him. When he is acting, he does it for William. Finally, at a very mature age, he sets out to search and meet him.

It is probably not Irving's best book, but it is fun to read. There are stretches, especially when he talks about medical details or specific illnesses, where less would have been more and you get tempted to skip a couple of pages or fast forward. I regard this as the only major flaw of the narrative, other than that, the story is serious enough to make you think about the essence of life, love and death, but it also offers ample opportunity for an outburst of laughter.

It is a long story, but it is worthwhile to read it.

Wonderfully spoken, quite enjoyable! The German parts are.... sorry to be frank.... awful!
Could have done with some coaching by a native speaker.