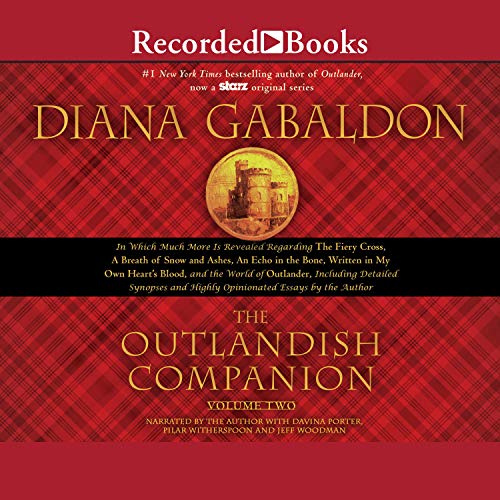 More than a decade ago, number-one New York Times best-selling author Diana Gabaldon delighted her legions of fans with The Outlandish Companion, an indispensable guide to all the Outlander books at the time. But that edition was just a taste of things to come. Since that publication, there have been four more Outlander novels, a side series, assorted novellas, and one smash-hit Starz original television series. Now Gabaldon serves up The Outlandish Companion, Volume Two, an all-new guide to the latest books in the series.

Written with Gabaldon's signature wit and intelligence, this compendium is bursting with generous commentary and juicy insider details, including - a complete chronology of the series thus far - full synopses of A Fiery Cross, A Breath of Snow and Ashes, An Echo in the Bone, and Written in My Own Heart's Blood - recaps of the Lord John Grey novels: Lord John and the Private Matter, Lord John and the Brotherhood of the Blade, Lord John and the Hand of Devils, and The Scottish Prisoner - a who's who of the cast of Outlander characters, cross-referenced by book - detailed maps and floor plans - an annotated bibliography - essays on subjects as wide ranging as Outlandish controversies regarding sex and violence, the unique responsibilities of a writer of historical fiction, and Gabaldon's writing process - a guided tour of the clothes, food, and music of the 18th century - a Gaelic glossary and pronunciation guide - personal photos from the author taken on the set of the Starz Outlander series As entertaining, sweeping, and addictive as the series itself, this second volume of The Outlandish Companion is a one (or two)-of-a-kind gift from an incomparable author.