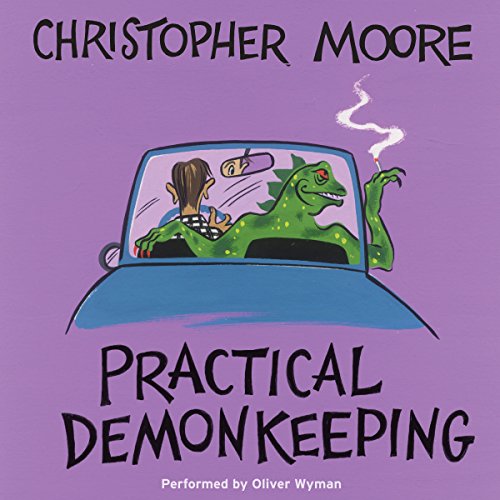 Travis and Catch come to the small town of Pine Cove, California, and that's when the trouble begins. You'd probably say Travis is a nice, good-looking kid, except he isn't really a kid at all, but a man who hasn't aged a day since World War I. Catch is the reason Travis hasn't aged a day; he's a demon, bound to Travis, and an albatross around his neck. Catch might not be so bad if it weren't for his habit of eating people, but in some relationships there are certain flaws one just can't be expected to overlook. And so Travis comes to Pine Cove in the hopes of finding the answer that will let him free himself of this curse and send Catch back to where he can't eat his friends and neighbors.

Moore describes Practical Demonkeeping as a "whimsical horror novel", but perhaps "demonic ensemble comedy" is more apropos. "Ensemble" is the important part of that description, for it's really the interactions between the characters that makes this story sing. The characters range from Gian Hen Gian, King of the Djinn, to the waitress Jenny whose only extraordinary talent is having the exceptional bad luck to get involved in this mess in the first place, to H.P., a man who might just be a little too obsessed with Lovecraft. The plot itself is nothing revolutionary, but how it unfolds is enjoyable from start to finish, and the listener will likely be surprised and amused along the way as it is unveiled what parts each of the ensemble cast play.

Oliver Wyman's general narrative voice has a youthful quality to it, with a wry, but good-natured tone which fits despite the sometimes dark turns the story takes (unavoidable when you have a primary character who tends to eat people). He provides each character with his or her own distinct voice, going above and beyond the call of duty with the guttural and abrasive  but somehow endearing!  growl of Catch.

Without the embellishment of an actor's reading, Moore's writing is quite fun and funny on the page, but as with many humorous works, the right narrator can take lively prose and make it even livelier  and this is one of those performances that truly elevates the text to a different level. Wyman, a veteran cartoon voiceover actor before turning his talents to audiobook narration, ably employs the skills of the former to strengthen and diversify the skills of the latter. Wyman's style isn't ideal for everything  reading a serious nonfiction book wouldn't be his forte  but for a book like this, which is practically a cartoon in prose form already, it's hard to imagine a better match. John Joseph Adams

In Christopher Moore's ingenious debut novel, we meet one of the most memorably mismatched pairs in the annals of literature. The good-looking one is 100-year-old ex-seminarian and "roads" scholar Travis O'Hearn. The green one is Catch, a demon with a nasty habit of eating most of the people he meets.

Behind the fake Tudor façade of Pine Cove, California, Catch sees a four-star buffet. Travis, on the other hand, thinks he sees a way of ridding himself of his toothy traveling companion. The winos, neo-pagans, and deadbeat Lotharios of Pine Cove, meanwhile, have other ideas. And none of them is quite prepared when all hell breaks loose.