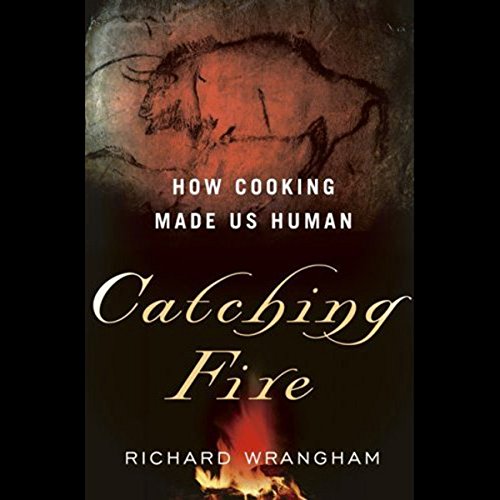 There are good reasons why, given a choice between raw and cooked food, most primates - including monkeys, chimpanzees, and the vast majority of humans - prefer their food cooked. For starters, cooked food is easier to eat and richer in both flavor and nutrients. Although we humans aren’t the only animals who would rather eat our food like this, we are the only ones who get to make the choice. In Catching Fire: How Cooking Made Us Human, author Richard Wrangham argues that the extra energy provided by the cooking process paved the way for the evolutionary transition from ape to man.

Though the purpose of his book is to illustrate this “cooking hypothesis”, Wrangham’s skill as a writer obviates the need for compromise between entertaining and informing his audience. His narrative is replete with fascinating examples and well-chosen anecdotes, like the story of Dr. Beaumont, whose significant contributions to our understanding of digestion came largely from his experiments on St. Martin, a patient whose life he had saved after St. Martin was accidentally shot. The incident left Beaumont’s patient with a permanent hole in his stomach - and a window through which to view gastric processes.

Kevin Parseau delivers a wonderful narration of Catching Fire that is consistently in harmony with the book’s tone and content. Parseau has a deep, musical voice and an unhurried but lively sense of pacing. His reading contains an element of wonder common to the greatest science and nature narrators, without ever taking on an undesirable, zealous character.

Wrangham’s compelling scientific discourse is, in itself, a little like cooked food. Significant studies from the fields of anthropology, evolutionary biology, and nutrition are carefully distilled and broken down. Each of Wrangham’s arguments is carefully thought-out, rich in a variety of evidence, and clearly presented - in short, his ideas are both easy to digest and substantive, and the result is an intellectually satisfying, fascinating exploration of what makes us human. –Emily Elert

Ever since Darwin and The Descent of Man, the existence of humans has been attributed to our intelligence and adaptability. But in Catching Fire, renowned primatologist Richard Wrangham presents a startling alternative: our evolutionary success is the result of cooking.

In a groundbreaking theory of our origins, Wrangham shows that the shift from raw to cooked foods was the key factor in human evolution. When our ancestors adapted to using fire, humanity began. Once our hominid ancestors began cooking their food, the human digestive tract shrank and the brain grew. Time once spent chewing tough raw food could be used instead to hunt and to tend camp. Cooking became the basis for pair bonding and marriage, created the household, and even led to a sexual division of labor.

Tracing the contemporary implications of our ancestors diets, Catching Fire sheds new light on how we came to be the social, intelligent, and sexual species we are today. A pathbreaking new theory of human evolution, Catching Fire will provoke controversy and fascinate anyone interested in our ancient origins - or in our modern eating habits.

"[A] fascinating study...Wrangham's lucid, accessible treatise ranges across nutritional science, Paleontology and studies of ape behavior and hunter-gatherer societies; the result is a tour de force of natural history and a profound analysis of cooking's role in daily life." ( Publishers Weekly)
" Catching Fire is convincing in argument and impressive in its explanatory power. A rich and important book." (Michael Pollan, author of In Defense of Food and The Omnivore's Dilemma)