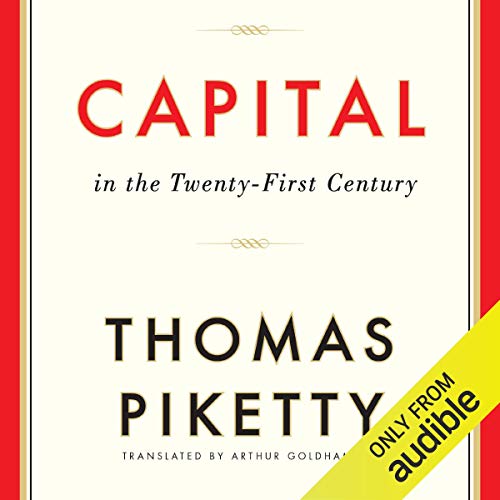 Capital in the Twenty-First Century

What are the grand dynamics that drive the accumulation and distribution of capital? Questions about the long-term evolution of inequality, the concentration of wealth, and the prospects for economic growth lie at the heart of political economy. But satisfactory answers have been hard to find for lack of adequate data and clear guiding theories. In Capital in the Twenty-First Century, Thomas Piketty analyzes a unique collection of data from 20 countries, ranging as far back as the 18th century, to uncover key economic and social patterns. His findings will transform debate and set the agenda for the next generation of thought about wealth and inequality.

Piketty shows that modern economic growth and the diffusion of knowledge have allowed us to avoid inequalities on the apocalyptic scale predicted by Karl Marx. But we have not modified the deep structures of capital and inequality as much as we thought in the optimistic decades following World War II. The main driver of inequality - the tendency of returns on capital to exceed the rate of economic growth - today threatens to generate extreme inequalities that stir discontent and undermine democratic values. But economic trends are not acts of God. Political action has curbed dangerous inequalities in the past, Piketty says, and may do so again.

A work of extraordinary ambition, originality, and rigor, Capital in the Twenty-First Century reorients our understanding of economic history and confronts us with sobering lessons for today.

"L.J. Ganser's voice and accents are superb, and emphasis is well placed." ( AudioFile)

this is with no doubt the most detailed information on the ways capital accumulates and spreads across the world. it makes one think about the future of mankind in the face of future capital distribution.

Good and important but too long

This is an important book, its message should be shouted from the rooftops of every city in the roch world. It is, however, extremely long considering the simplicity of its message and the proposed measures.

The voice performance is nice, albeit a little slow. I listened at 1.5x.

An indispensable book/view to understand how capital, inequality and social structures work in our time.

I loved this book. One of the best studies ever conducted. Eye opening. Would recommend to anyone.

Bought the book by accident in English as the name of the writer suggested English descent. Poor speaker who has to pronounce the plentifull french references. The 14 first chapters of the book are the perfect example of the use of long term big data to derive insightfull conclusions that I have never read before. From chapter 15 onwards the agenda gets more politically coloured and explosive but keeps its common sense. The author longs for a better world for which the political agenda will be difficult to write. Are we really back to the closing days of the "ancien regime" and will only a new shock bring humanity to the next level? In the same way as the world wars were a remedy against the seemingly natural law of capital accumulation that seems to be on a rampage in these days in all parts of the world.