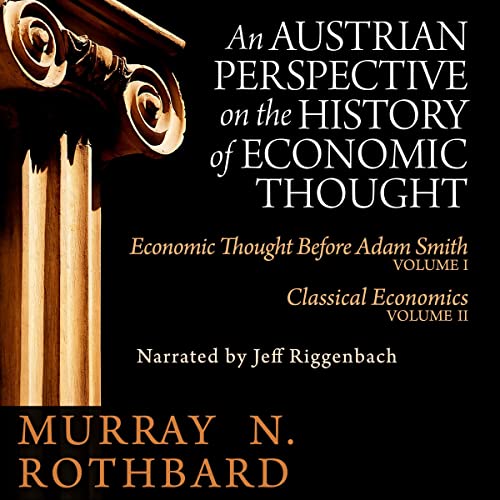 An Austrian Perspective on the History of Economic Thought

The appearance of the famous (and massive) volumes of Rothbard's Austrian Perspective on the History of Economic Thought in a new edition is cause for great celebration. They have been out of print for many years. They are at last accessible again, in a single book edition.

These are indeed the books that Mises himself longed to see. "A real history of economic thought," he said in 1955, "would have to point out the development of the doctrines and not merely list every book."

When these volumes first appeared, they were celebrated in Barron's and by top scholars around the world. They succeeded in changing the way people think about economic doctrine: the beginnings (not Adam Smith, but the Spanish theologians), the dead ends (Marx), the great triumphs (Bastiat, for example), and the truly great minds (Turgot and many others he rescued from near obscurity).

Rothbard read deeply in thinkers dating back hundreds and thousands of years, and spotted every promising line of thought — and every unfortunate one. He knew when an idea would lead to prosperity, and when it would lead to calamity. He could spot a proto-Keynesian or proto-Marxist idea in the Middle Ages, just as he could find free-market lines of thought in ancient manuscripts.

The numbers of insights in these volumes are countless. Every paragraph bursts with intellectual energy and the author's fiery passion to tell the listener the remarkable story of economics. Many reviewers have remarked that Rothbard's accomplishment seems superhuman. He seems to have read everything. His originality is overwhelming. His passion for liberty and integrity in science is evident. His disdain toward those who sell out to the state is manifest as well.

This set is a monument to Rothbard's genius, a resource that will be valuable to intellectuals for generations, and a great read too!