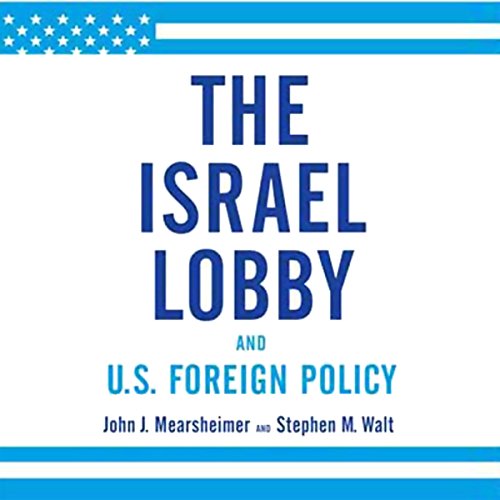 "The Israel Lobby" by John J. Mearsheimer and Stephen M. Walt, was one of the most controversial articles in recent memory. Originally published in the London Review of Books in March 2006, it provoked both howls of outrage and cheers of gratitude for challenging what had been a taboo issue in America: the impact of the Israel lobby on U.S. foreign policy.

Now in a work of major importance, Mearsheimer and Walt deepen and expand their argument and confront recent developments in Lebanon and Iran. They describe the remarkable level of material and diplomatic support that the United States provides to Israel and argues that this support cannot be fully explained on either strategic or moral grounds.

This exceptional relationship is due largely to the political influence of a loose coalition of individuals and organizations that actively work to shape U.S. foreign policy in a pro-Israel direction. This lobby has a far-reaching impact on America's posture throughout the Middle East in Iraq, Syria, Iran, and Lebanon, and toward the Israeli-Palestinian conflict, and, the authors contend, it has encouraged policies profoundly damaging to both America's national interests and Israel's long-term security.

The Israel Lobby and U.S. Foreign Policy is certain to widen the debate at a time when there is no more urgent issue than America's role in the Middle East.