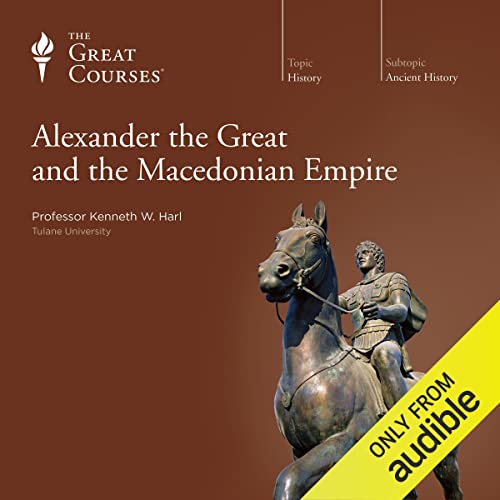 Alexander the Great and the Macedonian Empire

Alexander the Great - one of the most renowned figures in antiquity - has inspired everything from medieval romances to blockbuster movies, and military leaders from Julius Caesar to Napoleon to the U.S. general Norman Schwarzkopf. But who was this great king of Macedon? And why is he so legendary?

Go beyond the myth and learn about the man who changed the face of the ancient world and laid the foundation for the great traditions of the Roman Empire - all in fewer than 12 years. These 36 spellbinding lectures take you deep inside the world of Alexander to witness the astonishing feats of military genius that made his name renowned for millennia after his death.

Through this detailed portrait, you'll go beyond the legends and the myths to truly understand what made Alexander great. Along the way, several Alexanders emerge: the military general, Macedonian king, Persian emperor, Egyptian pharaoh, and leader of the Hellenic League. You learn about the many aspects of this extraordinary individual - his passions, extraordinary talents, and the training that helped mold his character. You'll learn how battles were fought and won in the ancient world and examine Alexander's great martial achievements within this larger military history. You'll also head onto the battlefield to analyze some of Alexander's greatest triumphs, including the Battle of the Granicus River and the Battle of the Hydaspes River.

Alexander's empire did not survive beyond his lifetime, but his legacy has cast a long shadow on the history of the West. Join Professor Harl for this journey into the world of Alexander and see how the Western world - and, indeed, our world - still bear the marks of this legendary conqueror.

J.W. Harley presents a great, in depth study of Alexander the Great.
Not only on Alexander's life, but also what lead to his success, the foundations his father Phillip layed as Macedonian King who unified the Greeks. And than moves on to Alexander's successors and his effects until today.
Well presented wiithout bias and never boring, but inspiring.

Professor Harl is a passionate lecturer who grabs your attention immediately and takes you with him on a journey to the past. I learned so much without even studying because these lectures make history come alive.