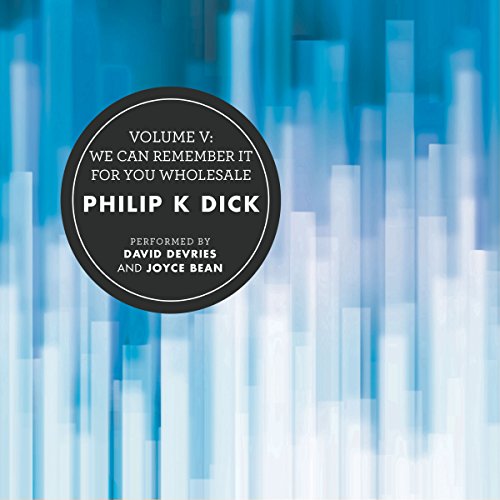 Volume V: We Can Remember It for You Wholesale

Philip K. Dick (1928-1982) was one of the seminal figures of 20th century science fiction. His many stories and novels, which include such classics as Ubik and Do Androids Dream of Electric Sheep?, reflect a deeply personal world view, exploring the fragile, multifarious nature of reality itself and examining those elements that make us - or fail to make us - fully human. He did as much as anyone to demolish the artificial barrier between genre fiction and "literature," and the best of his work has earned a permanent place in American popular culture.

We Can Remember It for You Wholesale is the final installment of a uniform, five-volume edition of The Collected Stories of Philip K. Dick. This expansive collection contains 27 stories and novellas written between 1963 and 1981, years in which Dick produced some of his most mature work, including such novels as Ubik, Flow My Tears, the Policeman Said, and A Scanner Darkly. Among the many pleasures included here are the classic title story (filmed twice as Total Recall), in which an ordinary clerk, awash in resurrected memories, discovers the truth about his past and about the astonishing role he has played in human history; the Hugo-nominated "Faith of Our Fathers," with its bleak and controversial vision of a predatory deity; and "The Electric Ant," a brilliant embodiment of a classic Dick theme: the elusive - and changeable - nature of what we believe to be "real." Like its predecessors, this generous volume offers wit, ingenuity, and intellectual excitement in virtually every second. The best of these stories, like the best of Dick's novels, are richly imagined, deeply personal visions that no one else could have written. They're going to be around for a very long time to come.

©1987 The Estate of Philip K. Dick (P)2015 Brilliance Audio, all rights reserved. Introduction © 1987 by Thomas M. Disch. The excerpt which appears at the beginning of this volume is from a collection of interviews with the author conducted by Paul Williams and published in Only Apparently Real, Arbor House, 1986. Used with permission.
Fantasy Anthologien & Kurzgeschichten
Mehr anzeigen Weniger anzeigen

Das sagen andere Hörer zu Volume V: We Can Remember It for You Wholesale