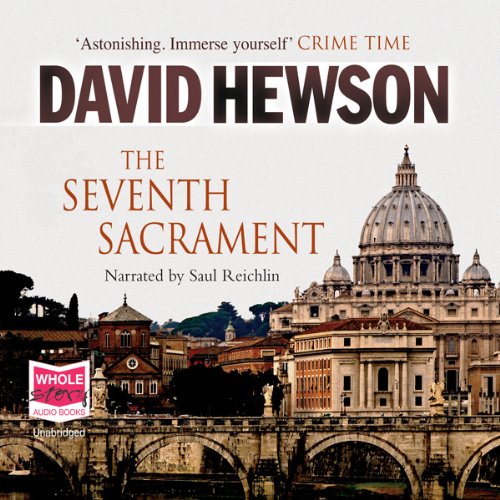 It begins on one of Rome's least-known hills, the Aventino, in the public piazza fronting the mansion of the Knights of Malta. There, a curious keyhole to the knights' estate reveals an astonishing view, a direct line across the Tiber to the dome of St. Peters in the distance.

For seven-year-old Alessio Bramante the act of peeping through the keyhole on his way to school each day is a ritual, a way of establishing a bond with his difficult, distant father, one of Rome's most famous archaeologists, Giorgio Bramante. Then one day, after an unexpected visit to one of Giorgio's underground excavations, Alessio disappears. A group of students who had slipped into the site, an ancient Mithraic temple, attract the blame. A tragedy occurs. Alessio is never found, and it's his father who goes to jail.

Fourteen years later, in an arcane shrine by the Tiber known as the Little Museum of Purgatory, a tee-shirt belonging to Bramante's son begins to show fresh bloodstains. No one can understand how the marks have appeared behind the glass. Soon it becomes apparent that the newly-released Giorgio Bramante is bent upon a vicious and terrifying revenge on all those he blames for the loss of his son, and numbers Inspector Leo Falcone, a member of the original investigating team, among his targets. In the depths of the labyrinth he knows better than any man, a distraught father seeks his vengeance against those he hates.

Nic Costa, watching Falcone move relentlessly into the man's deadly grip, realises the answer to the deadly present must lie in solving a cold case that, like the forgotten Alessio Bramante, has long been regarded as dead and buried for good.

"Artfully weaves several points-of-view as it shifts between past and present....A mystery whose poignant resolution few readers will anticipate." (Publishers Weekly)