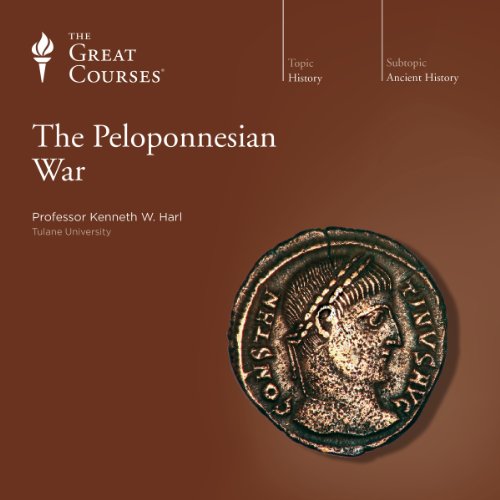 The Peloponnesian War pitted Athens and its allies against a league of city-states headed by Sparta. The ancient Greek historian Thucydides captured this drama with matchless insight in his classic eyewitness account of what was arguably the greatest war in the history of the world up to that time.

These 36 half-hour lectures draw on Thucydides' classic account as well as other ancient sources to give you a full picture of the Greek world in uneasy peace and then all-out war in the late 5th century B.C. Professor Harl plunges you into the thick of politics, military strategy, economics, and technology.

You will feel the ancient Greek world come alive as you explore the war debates at Athens and Sparta, the devastating plagues that swept through Athens, the Revolt of Mytilene, the Battle of Pylos, the Athenian and Spartan's disastrous expedition to Sicily. You'll experience the thick of action and consider lively scholarly debates that continue to this day.

Unlike earlier great wars, the Peloponnesian War was not a conflict between kings, but between citizens from different city-states who shared the same language, gods, and festivals. Citizen assemblies decided questions of war-voting on their own fates, since they were the ones who had to do the fighting.

One of the most remarkable aspects of this era is that culture flourished side-by-side with the politics of war - that, even as Athenian citizens were honoring Aristophanes' mocking antiwar play, "The Acharnians." By giving it first prize in a drama competition, they were debating with equal ardor whether to continue the war, and decided overwhelmingly to do so.