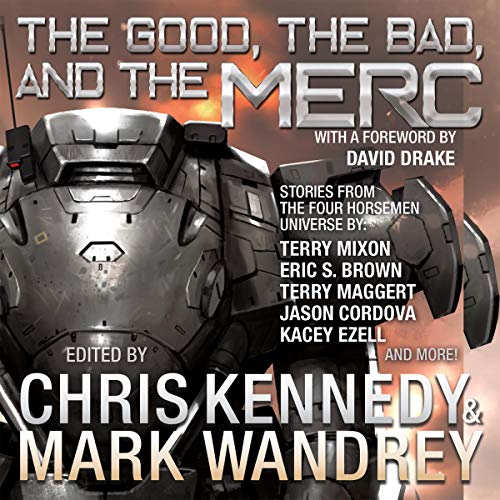 The Good, the Bad, and the Merc

Even more authors and stories. Still the same best-selling universe.

It's the 22nd century. Humanity has taken its first steps into the galaxy, and we've found ourselves in a vast playground of alien races, environments, and cultures. As the newest players on the universal stage, though, our position is readily apparent - we're at the bottom of the food chain.

Welcome back to the Four Horsemen universe, where only a willingness to fight and die for money separates humans from the majority of the other races. While some of the stories inside deal with mercenaries, others introduce listeners to the other guilds, organizations, and races that make up the landscape of the Four Horsemen universe, as well as providing additional insight into the characters of the mainline novels.

What's it like to be a medic on the beach or to learn how to kill from a mother not your own? Come find out!

In a galaxy this big, you'll find that some of the races are good and others are bad, but only the best are mercs!

Das sagen andere Hörer zu The Good, the Bad, and the Merc