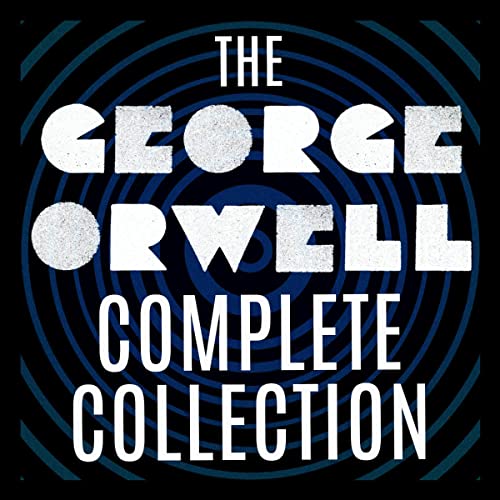 This audiobook includes unabridged recordings of all George Orwell's greatest works: six novels, three books of non-fiction, a collection of his most well-renowned essays and the complete collection of his poetry.

1984 - Winston Smith begins to rebel against Big Brother's totalitarian control and falls in love with fellow worker Julia but soon discovers the true price of freedom is betrayal.

Animal Farm - revolution is afoot for the animals at Manor Farm, and Mr Jones must pay the price.

The Road to Wigan Pier - vivid descriptions of social injustice, cramped slum housing, dangerous mining conditions, squalor, hunger and growing unemployment create a searing account of working-class life in the bleak industrial heartlands of Yorkshire and Lancashire in the 1930s.

Burmese Days - John Flory, a white timber-merchant in 1920s Burma, sets out to untangle societal conventions and help Dr Veraswami save his reputation.

Homage to Catalonia - having enlisted to fight for an anti-Stalinist communist party in Spain, Orwell is soon forced to flee the country and here discusses the destructive nature of Soviet communism.

Coming Up for Air - in search of a simpler life, George Bowling escapes London and an impending sense of war to return to his childhood village.

Keep the Aspidistra Flying - Gordon Comstock quits his advertising job to pursue the creative life in opposition to 'the money god'. Only his ever-faithful Rosemary can rouse him from the stupor and challenge his commitment to his chosen way of life.

A Clergyman's Daughter - intimidated by her father, the rector of Knype Hill, Dorothy performs her submissive roles of dutiful daughter and bullied housekeeper. Her thoughts are taken up with the costumes she is making for the church school play, until her routine shatters and Dorothy finds herself down and out in London.

Essays: a wide-ranging selection of Orwell's essays, through which he ranges from reflections on his boyhood schooling and the profession of writing to his views on the Spanish Civil War and British imperialism.