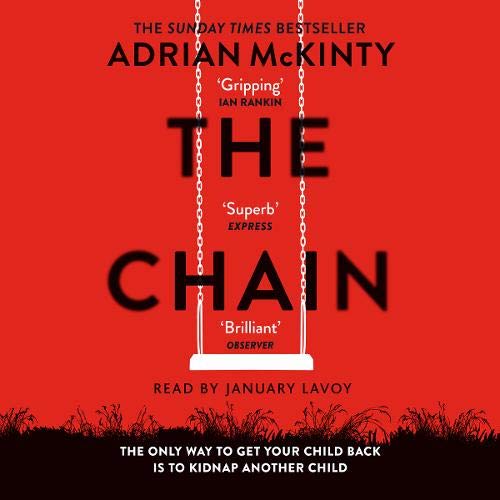 You are a parent. Your phone rings. You answer it. It's a panicked stranger.

They tell you that they have kidnapped your child.

The stranger then explains that their child has also been kidnapped, by a completely different stranger.

Their child will be released only when you kidnap a new child.

Your child will be released only when, after you kidnap the new child, that child's parents kidnap yet another child.

You are now part of The Chain.

It's something parents do every morning: Rachel Klein drops her daughter at the bus stop and heads into her day. But a cell phone call from an unknown number changes everything: it's a woman on the line, informing her that she has Kylie bound and gagged in her back seat, and the only way Rachel will see her again is to follow her instructions exactly: pay a ransom, and find another child to abduct. This is no ordinary kidnapping: the caller is a mother herself, whose son has been taken, and if Rachel doesn't do as she's told, the boy will die.

Rachel is now part of The Chain, an unending and ingenious scheme that turns victims into criminals - and is making someone else very rich in the process. The rules are simple, the moral challenges impossible; find the money fast, find your victim, and then commit a horrible act you'd have thought yourself incapable of just 24 hours ago.

But what the masterminds behind The Chain know is that parents will do anything for their children. It turns out that kidnapping is only the beginning.