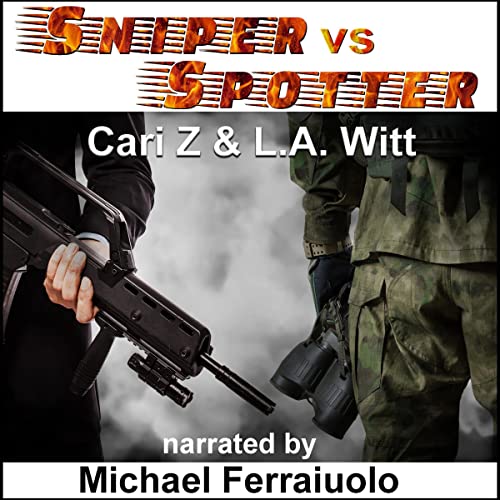 Mortal-enemies-turned-furniture-breaking-lovers August Morrison and Ricardo Torralba have found a groove that suits them both. They’ve teamed up as hired guns, they live together, and by some miracle, they haven’t killed each other. It’s the closest to normal they’ll ever have, and they love it.

But, their guns-and-roses future is thrown into chaos when Ricardo’s past comes crashing into their present. What begins as a favor for an old friend - well, “friend”, but don’t tell August - quickly spirals into something far bigger than they anticipated. Now, they’re in way over their heads with powerful people on both sides of the law, and it’s going to take more than snark and explosions to see them through.

Sniper vs Spotter is the sequel to the apparently-it-doesn’t-want-to-be-a-stand-alone Hitman vs Hitman, which absolutely was supposed to be a stand-alone, but August and Ricardo (predictably) refused to be contained. Our audiobook narrator also shares some of the blame, Michael. So, here we are.