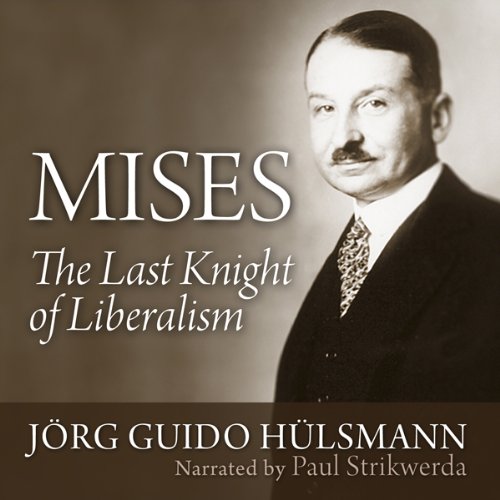 Here is a magisterial book for today and the ages, one that inspires awe for both the subject and the author who accomplished the seemingly impossible: a sweeping intellectual biography, constructed from original sources, of the 20th century's most astonishing dissident intellectual. It has the apparatus of a great scholarly work but the drama of a classic novel.

Ludwig von Mises' colleagues in Europe called him the "last knight of liberalism" because he was the champion of an ideal of liberty they considered dead and gone in an age of central planning and socialism of all varieties. During his lifetime, they were largely correct. And thus the subtitle of this book. But Mises was not deterred in any respect: not in his scientific work, not in his writing or publishing, and not in his relentless fight against every form of statism.

Born in 1881, he taught in Europe and the Americas during his century, and died in 1978 before the dawn of a new epoch that would validate his life and ideals in the minds of millions of people around the world. The last knight of liberalism triumphed. Jörg Guido Hülsmann, professor of economics at the Université d'Angers, tells the full story of his dramatic and inspiring life and contributions - and in the course of it, provides a reconstruction of the history of the Austrian School of economics of which Mises was the leading expositor, including the entire history of economic thought on the European continent and in the United States during the 20th century.Virtually everything in this book is new, a result of ten years of combing archives in five countries and unprecedented access to the voluminous papers of Mises and those of his colleagues - and written by an author who is a master of the discipline and all the languages involved (German, English, and French). Though the book is huge (1,200 pages), it reads like a great novel, with a fast pace and high drama, which Paul Strikwerda brings alive with his narration.