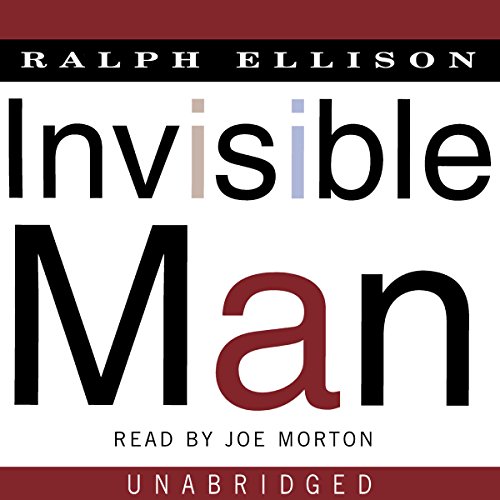 An idealistic young man strives to make his way among the like-minded of his own Black community and the larger white world beyond only to experience cascading disillusionment in both. He is The Invisible Man, the protagonist of Ralph Ellison’s masterpiece, electrifying today, and devastatingly so when published in 1953. A richly poetic and cinematic work carrying a searing social critique, the novel features a first-person narrative that seems written to be heard as much as read. And the actor reading to us here seems to have been born for the role; as the movie trailers say, Joe Morton is The Invisible Man.

From his nameless and hidden existence in a Manhattan basement, our narrator leads us through the events leading to his identity  or lack of one. A high school valedictorian down South, he receives a scholarship from a white group  after being brought onstage for a humiliating, bigoted burlesque. Honored at his Black college to chauffeur a visiting white benefactor, he accedes to the request to take a fateful detour through the town’s Black slums. As a result, the college’s president, a venerated yet utterly Machiavellian figure, scapegoats him. Expelled and directed north for redemption and employment, he again becomes the fall guy, literally and figuratively, when he is injured and laid off from his job in a union-embattled New York City factory.

Nursed back to health by the kind, maternal Mary up in Harlem, he seems to find his calling at the unlikely event of an elderly couple’s eviction. Spontaneously addressing the roiling crowd to temper their rage lest it incite the armed white evictors, the injustices he shares with them by race, as well as those befalling him for less obvious reasons, impassion him to eloquently encourage their defiance. His oratory draws him to the attention of Jack, head of ‘the brotherhood’ (Ellison’s stand-in for the Communist movement), who offers him work  and successfully indoctrinates him with utopian propaganda and sets him up to lead the party’s Harlem chapter. Seduced by his prestige among the party’s white sophisticates and a long-craved sense of purposefulness he embraces his work, even standing down Ras, an afro-centric nihilist violently competing for followers. Intrigue upon intrigue later, a more sinister threat reveals itself in his dogmatically ruthless brother-mentor plotting to further his cause even at the expense of others’ lives. Racism, our narrator shatteringly learns, is but one form of man’s inhumanity to man. And so, he has hibernated, invisibly, until now, until a stirring in his soul and imagination suggests the possibilities of his own spring.

Propelled largely through its characters’ richly defined verbal personae, the novel is perfectly realized by Joe Morton’s masterful, dramatically distinct vocal embodiments; the protagonist himself is, not surprising, his tour de force. In the end, we experience the sensibility of actor and author as one and the same: a perfect match-up indeed. Elly Schull Meeks

Ralph Elllison's Invisible Man is a monumental novel, one that can well be called an epic of 20th-century African-American life. It is a strange story, in which many extraordinary things happen, some of them shocking and brutal, some of them pitiful and touching - yet always with elements of comedy and irony and burlesque that appear in unexpected places.

After a brief prologue, the story begins with a terrifying experience from the hero's high-school days; it then moves quickly to the campus of a "Southern Negro college" and then to New York's Harlem, where most of the action takes place.

The many people that the hero meets in the course of his wanderings are remarkably various, complex and significant. With them he becomes involved in an amazing series of adventures, in which he is sometimes befriended but more often deceived and betrayed - as much by himself and his own illusions as by the duplicity and the blindness of others.

Invisible Man is not only a great triumph of storytelling and characterization; it is a profound and uncompromising interpretation of the anomalous position of blacks in American society.

Really felt the book come to life in my ears. If you have read this book, then the Audible Version is a must do. What really made this book come to life is the astounding narration skills of Joe Morton. Every accent, persona, even breaths taken were phenomenal.

Super happy with this option.

An interesting and remarkable story of minority struggles and conditio humana, perfectly read by J. Morton. A must-read.