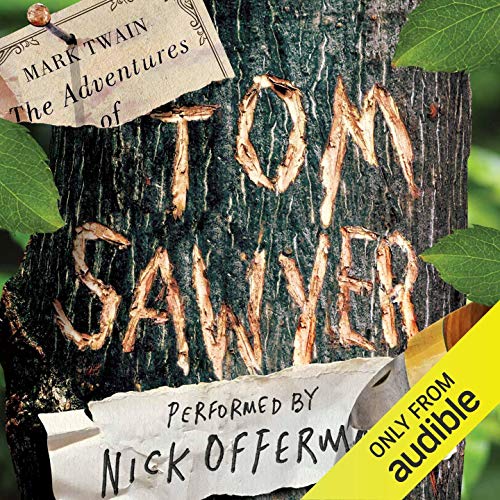 "Being paid to perform such a gratifying activity as reading Mark Twain aloud felt powerfully akin to Tom Sawyer hoodwinking other boys into paying him for the privilege of whitewashing a fence. Let's keep that between us." (Narrator Nick Offerman)

With The Adventures of Tom Sawyer, not even Twain could have known that when he introduced readers to the inhabitants of the fictional town of St. Petersburg, Missouri, he would also be introducing two characters - one a clever and mischievous scamp, and the other a carefree, innocent ragamuffin - whose stories would ultimately shape the course of American literature. But whereas its sequel and companion piece, Adventures of Huckleberry Finn, would harken an end to childhood, the story of Tom Sawyer is one that depicts the excitement and adventure of boyhood along the Mississippi.

Revisit this enduring classic and you will be struck not only by Twain's skill at capturing a time and place so vividly but also by his uncanny ability to crystallize those oftentimes tumultuous and conflicting emotions that a child experiences at the precipice of adulthood: a longing to be free from the rules and obligations of adults while enjoying the laxity inherent in childhood; a love of all things macabre, like blood oaths, cemetery cures, and haunted houses, that reveal a true innocence - an unawareness of real-life consequences and one's own mortality; and the pangs of guilt when knowing the right thing to do and doing the right thing appear to be at odds.

A natural storyteller and raconteur in his own right - just listen to Paddle Your Own Canoe and Gumption - actor, comedian, carpenter, and all-around manly man Nick Offerman (Parks and Recreation) brings his distinctive baritone and a fine-tuned comic versatility to Twain's writing. In a knockout performance, he doesn't so much as read Twain's words as he does rejoice in them, delighting in the hijinks of Tom - whom he lovingly refers to as a "great scam artist" and "true American hero" - while deftly delivering the tenderness and care Twain gave to his own characters.

"Offerman's Illinois-raised voice and actor's talent suit him ideally to channel Mark Twain and his archetypal American Puck (that "P" isn't a typo), who played pirates with an archetypal American Huck, conned his pals into whitewashing the fence, fell in love with Becky Thatcher and showed up alive at his own funeral." (The New York Times)

"There’s something about his wry Midwestern merriment that aspires to Twainishness." (Men’s Journal)