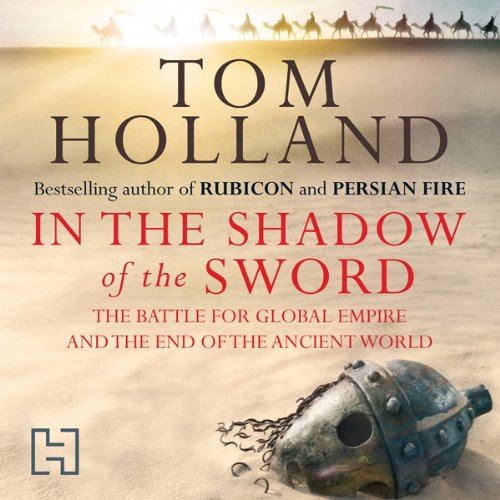 In the Shadow of the Sword

In the 6th century AD, the Near East was divided between two venerable empires: the Persian and the Roman. A hundred years on and one had vanished forever, while the other seemed almost finished. Ruling in their place were the Arabs: an upheaval so profound that it spelt, in effect, the end of the ancient world. In The Shadow of the Sword, Tom Holland explores how this came about. Spanning from Constantinople to the Arabian dessert, and starring some of the most remarkable rulers who ever lived, he tells a story vivid with drama, horror, and startling achievement.

"An unequivocal argument for the relevance of ancient history . . . Holland never strains for modern references; they are implicit in the stories he tells with such scholarship and flair.” (Geraldine Bedell, Observer)
“Brings this tumultuous, epoch-making period dazzlingly to life.” (William Napier, Independent on Sunday)
“Tom Holland has a rare eye for the detail, drama and the telling anecdote . . . A vibrant, bloodthirsty history, told with a rich sense of irony and irresistible narrative timing” (Dominic Sandbrook, Daily Telegraph)

Das sagen andere Hörer zu In the Shadow of the Sword

Fantastic, good performance. Illuminates what is often thought of as dark period of history. Antiquity continued in the East seemingly uninterrupted for quite a while. Rated 4/5 because the title misses chapter names (book segments) and organization. Unlike other audio book by Tom Holland, Persian Fire, this one is sadly fragmented in 41 nameless chapters, even though the narrator mentions them at their beginning.