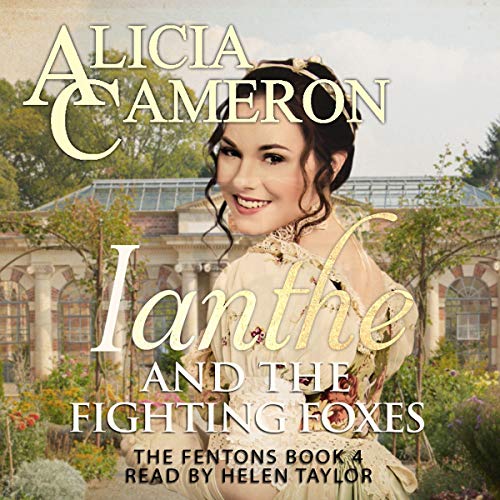 Ianthe and the Fighting Foxes

Alicia Cameron's audiobooks should be prescribed for depression...

To the miserable atmosphere of the country house of Studham, home to the Fighting Fox family, Miss Ianthe Eames, a whirlwind, arrives.

Known in London as the Fighting Foxes, Lord Edward Fox is at odds with his stepmother, Lady Fox, and her spoiled son Curtis. Studham is hardly a joyful place to live.

As the Fighting Fox family await the arrival of a poor relation from France, Lady Fox is ready to berate her late arrival, Lord Edward Fox is resigned to ignoring her, Curtis is ready to patronise her - while the resident visitors, Lady Richards and her daughter Sally, are ready to sympathise.

In bursts Ianthe Eames - beautiful, richly dressed in the best Paris fashions, confident and joyous, not the pathetic supplicant they expected. Ianthe shocks and delights, and the whole household is upended in a half-hour.

Ianthe seems unaware of Lady Fox's disapproval, unable to be patronised by Curtis, and in need of no sympathy whatsoever. Her beauty and wit make it quite impossible for Lord Edward Fox to ignore her. Edward, wrapped in his defensive shell, finds that before long Ianthe invites him to join her schemes for a happier household than he has ever known.

When Ianthe's friend, the handsome Marquis of Audley meets Sally Richards, sparks fly. The marquis wants no wife, but Sally dents his pride. Soon they are dangerously entangled.

As the gentlemen of the area discover the charming new residents of Studham, the marquis and Lord Fox find themselves with rivals in pursuit of the two young ladies.

There are other mysteries to unwind. Who is the dashing Comte d’Emillion-Orsay? Why does a box of costly jewellery arrive? Who is Ianthe’s strange French maid.