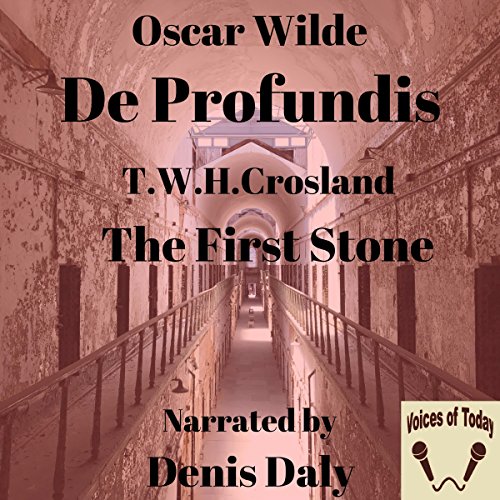 De Profundis and the First Stone

In 1895 Oscar Wilde was sentenced to two years gaol with hard labour for offences “of gross indecency.” After spells in Newgate, Pentonville, and Wandsworth prisons, Wilde was transferred to Reading Gaol, where he completed the remainder of his sentence.

Two major works were inspired during this period: The Ballad of Reading Gaol, which was prompted by the execution of another prisoner, Charles Thomas Wooldridge in 1896, and De Profundis, a lengthy letter to his former lover, Lord Alfred Douglas. Wilde was not allowed to send the letter by post, but was permitted to take it with him when discharged from prison. He gave the letter to Robert Ross, to be sent to Douglas, and departed for France, where he died three years later. Douglas later denied having received the letter.

De Profundis was published posthumously in 1905 in an expurgated version which has been used for this recording. The original text, containing nearly 50,000 words, was severely edited by Robert Ross down to a length of just under 18,000 words, many of the emendations being references to the family of the Marquis of Queensberry. Although the complete text was presented at a court case in 1913, it was not published until 1962. In this rambling epistle Wilde reflects on suffering, forgiveness, and redemption. As a confessional text, it ranks with the Confessions of Saint Augustine as an examination of the nature of penitence, its origin and transformative effect.

Thomas William Hodgson Crosland (1865-1924) was a journalist and social commentator. He became an associate of Douglas, after the latter had converted to Catholicism as proof of his personal reformation. Crosland was extremely moralistic and missed no opportunity to pillory public figures whom he considered to be examples of moral depravity or hypocrisy. Among his targets was Oscar Wilde, whose contrition, as expressed in De Profundis, he believed to be an elaborate and convenient sham.