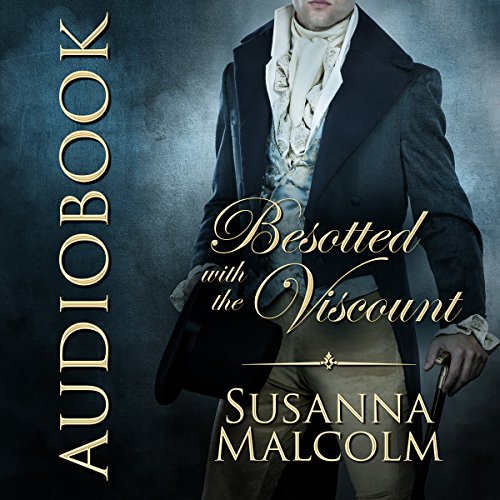 Besotted with the Viscount

the charming and hilarious new author, Susanna Malcolm, with a classic Regency that only Nicholas Boulton could narrate so perfectly.

Lord Gideon Birch, wounded former naval Captain and freshly minted Viscount, has a colorful history as a renowned lover of women. But a decade at war has transformed this sensual rake, and what he wants now is only to live a life on his own terms.

And so, he comes to the quietest village in England, searching for serenity and instead, encounters an astonishingly enthralling pair of green eyes that unsettle his carefully constructed world.

Though she would love nothing more than to leave Littleover, Miss Theadosia Ridley is sorely hampered by a lack of funds. Desperately trying to earn enough to feed herself and her ailing family servant, she must reluctantly accept Lord Birch's opportune offer of employment: He needs her and her knowledge of Greek to catalog and translate the extensive library he's accumulated over the course of the war.

Dubious of his motives, she vows to keep her distance from the dashing newcomer. But time in his company unveils a compelling man far more complex than his shallow reputation would lead one to believe. Can she uphold her vow not to succumb to his charms?

Most disappointing book of the year

It started out so well. Brilliant narrator, came recommended (or at least so it seemed) on the facebook page of an author whose books I have really liked. A male MC with disabilities from the war, a female MC who knows languages. OK, so the title was sort of a red flag, but really, histrom narrated by Nicholas Boulton! Shared by Elizabeth Kingston! What could possibly go wrong?

The first 2/3 of the book was mostly OK. A few niggles, sure, but nothing major if the male MC (Gideon) steps up further on (spoiler alert: he doesn't).

OK, so a short recap (and this will most likely contain tonnes of spoilers): Gideon, Captain Lord Birch, is a Viscount recently back from the navy, where he's been heroic enough to earn his title. He's been known as a rake in his younger years, but now he only wants to live in peace in the country with his dogs and a bunch of books he saved from destruction (his spoils of war). He meets Thea, Miss Theodosia Ridley, a quirky Gentleman's daughter, destitute by being orphaned in her late teens or early twenties and caring for an elderly, sick servant who is more like family. She knows Greek and Gideon, immediately besotted by her looks, hires her to organise his library. He's extra glad to hear she's destitute, because then she will definitely say yes to work for him!

Gideon has hardly any servants, and although he's been raised as a gentleman, he sees nothing wrong in letting her spend a lot of time alone with him in his house without a chaperone of any kind, so apparently he doesn't see her as a lady? He touches her leg, uninvited. He kisses her, uninvited, and doesn't understand why she's upset by it. She has a back story of a suitor who after courting her left to marry a girl of means, so she's been burned and also has a bit of a reputation in the village. He doesn't seem to care anything about propriety or her reputation. But he loves her! And dreams of her every night! Especially her body! Especially her round derriere! (Funny, I didn't know you could really see someone's derriere under regency dresses).

Thea's earstwhile suitor comes back from his honeymoon on the Continent and promptly propositions her, suggesting now that he has means, he can set her up as his mistress and she will never want for anything. She turns him down, but arrives at work upset that everyone seems to think she's for sale. Gideon comforts her, and somehow this leads to them starting an affair. He has told her he loves her, but oddly enough, he's never once mentioned he wants to marry her. He finds it strange that she doesn't believe he loves her. They make love everywhere in his home, even outdoors, naked in the daytime. Nobody sees them or suspects anything. (He apparently have no servants at all, no footmen, no cook, no valet, not even a girl who comes in to clean? Because they can romp around without any witnesses at all.)

Gideon goes away to London alone to go to a wedding. Still no mention that he would like to marry her. When he is gone, the first suitor turns up at Thea's cottage at night, I don't even know why, probably to create conflict, because he is seen leaving her house, the rumors start and Thea becomes persona non grata in their little village. On top of that, the woman she's been caring for dies. In her despair, Thea walks two miles in the rain to Gideon's house to seek comfort. He's been home for almost a week, but hasn't been to see her, even when she didn't turn up for work, because he's heard the rumors and decides she has to come to him. She's been distraught by the prolonged illness and death by her servant and cannot understand why he hasn't come to see her.
When she arrives at Gid's place, he demands she explain herself. He's not worried about how she's been while he's been gone, why she looks so sad, how she's been holding up with these rumors going around. He doesn't act like a loyal friend, is what I'm getting at, but is only jealous.

After this conflict, that's mainly down to his inability to listen to her and consider her feelings, she eventually decides to leave the country, now that nothing's keeping her there. He finds out last minute from her friend, who is mostly there as a prop to further their relationship, he follows her onboard a ship (but he swore he would never set foot on a ship again! See how he loves her!), locks himself in with her in her cabin and tells her they are going to get married, and if she doesn't want to, he'll still stay locked in her cabin all night in connubial bliss or whatever. This is where I'm considering throwing my phone, but I can't afford a new one, so I don't.

Apparently, she finds this totes romantic, and in the epilogue they're married. To each their own I guess, but he's never respected her stated boundaries, and doesn't listen to her, so good luck with that.

So. Historical accuracy, probably around 3% or whatever. Anger inducing male MC that I cannot understand why she ends up with. He touches or kisses her repeatedly without asking permission, and doesn't understand the major power imbalance between them. She withholds three words and he feels disadvantaged, what the actual f***? He never even tells her he wants them to get married until the very last minute when she's already moving on with her life, and he feels disadvantaged? Although he's a wealthy nobleman and she's an orphaned girl without money or family to stand by her, and he's been bedding her for weeks? And I haven't even mentioned that his siblings believe she's trying to take advantage of him (don't make me laugh!!)

Well, I learned my lesson, don't get a book just because it's narrated by Nick Boulton, unless it comes recommended from (or is written by) someone I can actually trust. Also, don't read books with titles like this. It's not even true, if anyone was besotted, it was him, not her. At least the narration is top notch.