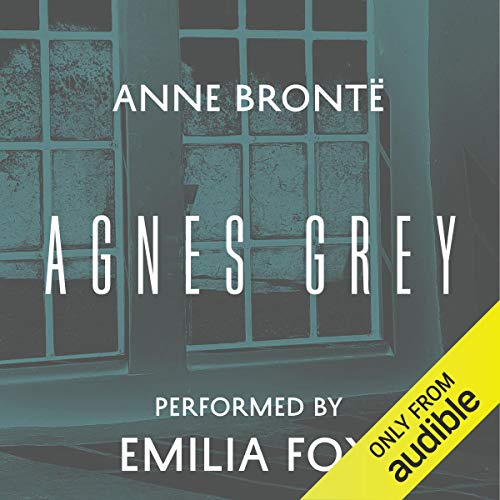 Drawing heavily from personal experience, Anne Brontë wrote Agnes Grey in an effort to represent the many 19th Century women who worked as governesses and suffered daily abuse as a result of their position.

Having lost the family savings on risky investments, Richard Grey removes himself from family life and suffers a bout of depression. Feeling helpless and frustrated, his youngest daughter, Agnes, applies for a job as a governess to the children of a wealthy, upper-class, English family.

Ecstatic at the thought that she has finally gained control and freedom over her own life, Agnes arrives at the Bloomfield mansion armed with confidence and purpose. The cruelty with which the family treat her however, slowly but surely strips the heroine of all dignity and belief in humanity.

A tale of female bravery in the face of isolation and subjugation, Agnes Grey is a masterpiece claimed by Irish writer, George Moore, to be possessed of all the qualities and style of a Jane Austen title. Its simple prosaic style propels the narrative forward in a gentle yet rhythmic manner which continuously leaves the listener wanting to know more.

Anne Brontë, the somewhat lesser known sister, was in fact the first to finish and publish Agnes Grey under the pseudonym of Acton Bell. Charlotte and Emily followed shortly after with Jane Eyre and Wuthering Heights.

As Anne passed away from what is now known to be pulmonary tuberculosis at the age of just 29, she only published one further title; The Tenant of Wildfell Hall. As feminist in nature as Agnes Grey, Anne's brave voice resonates and permeates during one of the most prejudiced and patriarchal times of English history.

Emilia Fox is an English stage, film and TV actress, best known for playing the role of Dr Nikki Alexander on the BBC's crime drama Silent Witness. Having been involved in the programme since 2004, she is now its longest serving cast member.

Her other credits include Merlin, Pride and Prejudice and Rebecca, and her theatre background includes performances of The Cherry Orchard with the Royal Shakespeare Company.

Emilia has also starred alongside Adrien Brody in Roman Polanski's The Pianist, beside Billie Piper and Dougray Scott in Things to Do Before You're 30 and with Maggie Smith and Kristin Scott Thomas in Keeping Mum.

She has voiced many audiobooks for Audible, including Philippa Gregory's The White Queen, William Shakespeare's The Tempest, Jane Austen's Pride and Prejudice, Sylvia Plath's Lady Lazarus and Victoria Hislop's The Island.

The Story is as simple and unapologetic as can be. First, there are hard lessons to learn for the Protagonist, she matures and captures the affections of an honourable man. A happy End ensures light entertainment:)