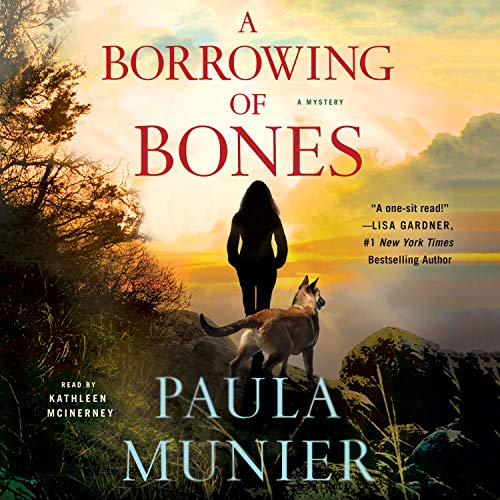 A Borrowing of Bones

The first in a gripping new series by Paula Munier, A Borrowing of Bones is full of complex twists, introducing a wonderful new voice for mystery listeners and dog lovers alike.

Grief and guilt are the ghosts that haunt you when you survive what others do not....

After their last deployment, when she got shot, her fiancé, Martinez, got killed, and his bomb-sniffing dog, Elvis, got depressed, soldier Mercy Carr and Elvis were both sent home, her late lover’s last words ringing in her ears: “Take care of my partner.”

Together, the two former military police - one 29-year-old two-legged female with wounds deeper than skin and one handsome five-year-old four-legged Malinois with canine PTSD - march off their grief mile after mile in the beautiful remote Vermont wilderness.

Even on the Fourth of July weekend, when all of Northshire celebrates with fun and frolic and fireworks, it’s just another walk in the woods for Mercy and Elvis - until the dog alerts to explosives and they find a squalling baby abandoned near a shallow grave filled with what appear to be human bones.

US Game Warden Troy Warner and his search-and-rescue Newfoundland, Susie Bear, respond to Mercy’s 9-1-1 call, and the four must work together to track down a missing mother, solve a cold-case murder, and keep the citizens of Northshire safe on potentially the most incendiary Independence Day since the American Revolution.

It’s a call to action Mercy and Elvis cannot ignore, no matter what the cost.

"Listeners are treated to a warm and realistic portrayal of life with a smart dog along with a winding story of danger and suspense. [Narrator Kathleen McInerney] expertly sets the pace in scene after scene, driving listeners ever closer to the complicated answers at the heart of this mystery." (AudioFile Magazine)