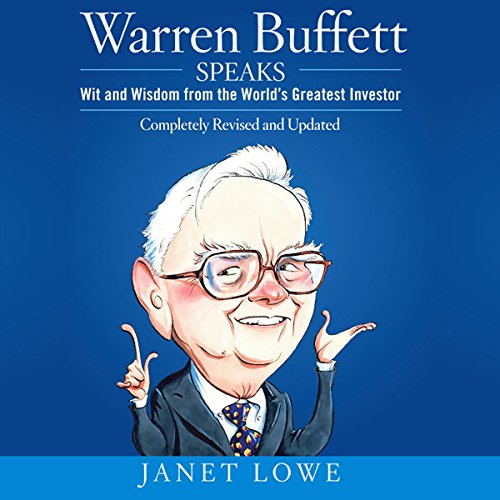 "With enough insider information and a million dollars, you can go broke in a year."

"What I am is a realist. I always knew I'd like what I'm doing. Oh, perhaps it would have been nice to be a major-league baseball player, but that's where the realism comes in."

"If a graduating MBA were to ask me 'How do I get rich in a hurry?' I would not respond with quotations from Ben Franklin or Horatio Alger, but would instead hold my nose with one hand and point with the other toward Wall Street."

"Wall Street is the only place that people ride to work in a Rolls Royce to get advice from those who take the subway."

Over the years, as Warren Buffett's influence and affluence have grown, one thing has remained the same - his unpretentious, honest, and optimistic approach toward business and life. Now you can discover life's little secrets of success as revealed by the world's greatest investor. In this wise and winning collection of quotes, writings, and favorite sayings, Warren Buffett speaks on diverse subjects such as investing, the Internet economy, family and friends, running a business, honesty, teaching, paying taxes, and much, much more. It also examines the thinking that prompted the second richest man in the world to give 85 percent of his wealth to the first richest couple (Bill and Melinda Gates) to distribute to charity.

Assembled by best-selling author Janet Lowe - and updated to reflect Buffett's life over the past decade - this audiobook includes a wealth of previously unpublished material. This unprecedented peak into the financial genius' wildly profitable philosophy is often surprising, always intriguing, and sparked throughout by Buffett's unique combination of savvy business smarts and wry wit.