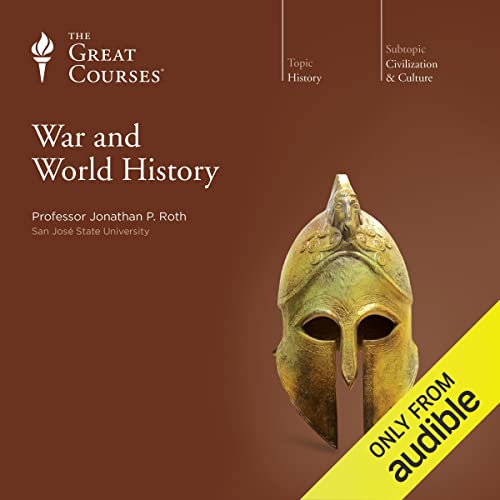 This fresh and challenging inquiry into human societies takes a deep look at the effects and roles of war. As the most complex of all human endeavors, warfare - from ancient to modern - has spurred the growth of essential new technologies; demanded the adoption of complex economic systems; shaped the ideology and culture of nations; promoted developments in art and literature; and spread faith across the globe.

Over the course of 48 highly provocative lectures, Professor Roth explores armed conflict across five continents. Far from a traditional approach to military events, this panoramic series is not the history of battles or military campaigns, but the story of the intimate interconnections of war with human cultures and societies and how these connections have shaped history.

You'll study the complex effects of culture, economics, politics, and religion on war - and war's influences on them. In this context, you chart the colorful history of the practice and methodology of warfare. Among many other things, you'll learn about

Probe these pivotal and revealing features of history and deepen your understanding of our extraordinary, evolving world.

A world history told from the perspective of war, can this work? Well, after listening to the course, my answer is: Yes, surprisingly well. The course discusses extensivily the interrelation of technic, religion, social changes and ideologies with the art of warfare on land and sea.
The course material is also excellent and could probably read independently.
The only minus is Prof. Roth´s habit of drawling at least one word in a sentence by a kind of two note rising melisma. I found it awful from the beginning and hated it to the end.