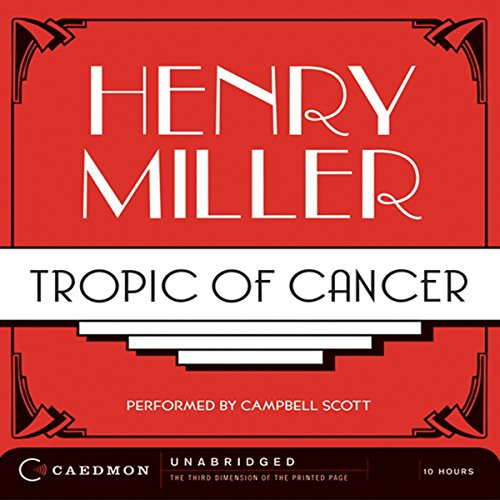 Tropic of Cancer is Henry Miller's 1934 "autobiography as novel" about the impoverished, middle-aged writer's expatriate sojourn in depression-era Paris and France. Banned in the US until 1961 for its sexual content, Tropic of Cancer has been and remains a literary classic of a unique sort. "A dirty book worth reading," Ezra Pound famously wrote, as he went on to compare it to James Joyce's Ulysses. Prominent 1930s literati  including T. S. Eliot, John Dos Passos, Aldous Huxley, and George Orwell  joined in praising this non-literary, literary work.

Campbell Scott's narrative style has a unique stamp. His baseline technique in Tropic of Cancer is the dampening of his voice, joined with a masterly expressive control that emanates from this restriction. The effect is a quite strong sense of, and control over, mood and an intimate narrative connection with the individual listener. Scott's approach is suggestive of sotto voce, literarily "under speaking", similar to that bit of news spoken by a friend through a cupped hand in lowered tones into your ear  in the Age of iPod, the narrator speaking through your earphones. Scott moves fluently from this baseline into the very lively stuff of Miller's tropes, riffs and rhetoric, and comically charmed outrages. Scott hits the marks, even as a tonal resonance of intimate communication remains constant. And Henry Miller's narrative voice? George Orwell observed, in his 1940 essay "Inside the Whale", "Read him for five pages, ten pages, and you feel the peculiar relief that comes not so much from understanding as from being understood. 'He knows all about me,' you feel. 'It is as though you could hear a voice speaking to you...with no humbug in it, no moral purpose, merely an implicit assumption that we are all alike.'"

With their production of Tropic of Cancer, Harper Audio and Campbell Scott have reached an elusive artistic benchmark: that point where the voice of the author and the voice of the narrator converge. David Chasey

Now hailed as an American classic, Tropic of Cancer, Henry Miller's masterpiece, was banned as obscene in this country for 27 years after its first publication in Paris in 1943. Only a historic court ruling that changed American censorship standards, ushering in a new era of freedom and frankness in modern literature, permitted the publication of this first volume of Miller's famed mixture of memoir and fiction, which chronicles with unapologetic gusto, the bawdy adventures of a young expatriate writer, his friends, and the characters they meet in Paris in the 1930s. Tropic of Cancer is now considered, as Norman Mailer said, "one of the 10 or 20 great novels of our century".
©1961 Grove Press, Inc. (P)2008 HarperCollins Publishers
Klassiker Belletristik Literatur & Belletristik
Mehr anzeigen Weniger anzeigen